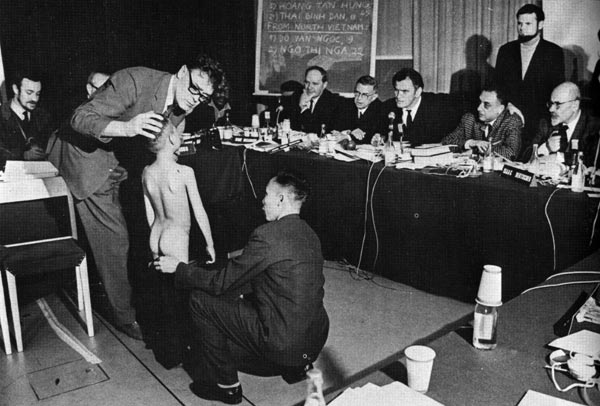 Nine-year-old Do Van Ngoc exhibits injuries from napalm in Vietnam.

“The Russell Tribunal, also known as the International War Crimes Tribunal, Russell-Sartre Tribunal, or Stockholm Tribunal, was a private People’s Tribunal organised in 1966 by Bertrand Russell, British philosopher and Nobel Prize winner, and hosted by French philosopher and writer Jean-Paul Sartre, along with Lelio Basso, Ken Coates, Ralph Schoenman, Julio Cortázar and several others. The tribunal investigated and evaluated American foreign policy and military intervention in Vietnam. This had taken place in the decade following the 1954 defeat of French forces at Diên Biên Phu and the establishment of North and South Vietnam. Bertrand Russell justified the establishment of this body as follows: If certain acts and violations of treaties are crimes, they are crimes whether the United States does them or whether Germany does them. We are not prepared to lay down a rule of criminal conduct against others which we would not be willing to have invoked against us. — Justice Robert H. Jackson, Chief Prosecutor, Nuremberg War Crimes Trials. The tribunal was constituted in November 1966, and was conducted in two sessions in 1967, in Stockholm, Sweden and Roskilde, Denmark. Bertrand Russell’s book on the armed confrontations underway in Vietnam, War Crimes in Vietnam, was published in January 1967. His postscript called for establishing this investigative body. The findings of the tribunal were largely ignored in the United States. … Representatives of 18 countries participated in the two sessions of this tribunal, which formally organized as the International War Crimes Tribunal. The tribunal committee consisted of 25 notable figures, predominantly individuals from leftist peace organisations. Many of these individuals were winners of the Nobel Prize, Medals of Valor, and awards of recognition in humanitarian and social fields. Neither Vietnam nor the United States was directly represented by any individual on the 25-member panel, although a couple of members were American citizens. More than 30 individuals testified or provided information to this tribunal. Among them were military personnel from the United States, as well as from each of the warring factions in Vietnam. Financing for the Tribunal came from many sources, including a large contribution from the North Vietnamese government after a request made by Russell to Ho Chi Minh. …”
Wikipedia
NYU: International War Crimes Tribunal Records TAM.098
[PDF] The Russell Tribunal in Stockholm 50 years ago – seen with the CIA’s eyes

Jean-Paul Sartre in the presidium surrounded by Simone de Beauvoir and Vladimir Dedijer.