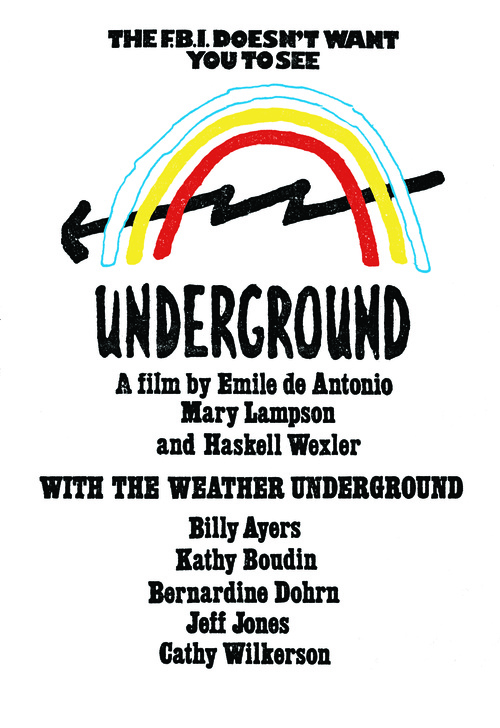 “Underground is a 1976 documentary film about the Weathermen, founded as a militant faction of the Students for a Democratic Society (SDS), who fought to overthrow the U.S. government during the 1960s and 1970s. The film consists of interviews with members of the group after they went underground and footage of the anti-war and civil rights protests of the time. It was directed by Emile de Antonio, Haskell Wexler and Mary Lampson, later subpoenaed by the Federal Bureau of Investigation in an attempt to confiscate the film footage in order to gain information that would help them arrest the Weathermen. Underground combines interviews with and archival footage of the Weathermen to provide a picture of this group, their opinions on American society, and their hopes for the future. The filmmakers use the material from their interactions with the Weathermen Bill Ayers, Kathy Boudin, Bernardine Dohrn, Jeff Jones and Cathy Wilkerson to structure its exploration of the formation and direction of the group. The film begins by presenting images and words that describe the Weathermen’s process of being radicalized in the 1960s through the civil rights movement, the anti-war movement, and communist revolutionary struggles in Cuba, Russia and China, as well as historical struggles in the United States over Native American rights and labor issues. The film moves on to discuss the Weathermen’s analysis of American society, addressing those who have inspired them, and further explaining the reasons behind their militancy, while also introducing the issue of tactics. … The situation of the Weatherman as fugitives wanted by the FBI necessitated an unconventional style in conducting their interviews. The footage was filmed in only three days, and Wexler shot the participants from behind or through a screen in order to conceal their individual identities. The film is unique in that the viewer is able to see the filmmakers but not the subjects themselves. The interactions between the Weathermen and filmmakers raise many questions about the role of documentary film and the contrived nature of its set-ups. This is apparent at several points in the film where the Weathermen express concern over the filmmakers catching their faces on camera, or complain about the artificiality of the overall conversation taking place. …”
Wikipedia
Revolutions in Storytelling,
From Underground to Citizenfour
NY Times – ‘Underground,’ a Documentary:Survivors of ‘Village’ Bombing Interviewed (May 1976)
iTunes
ThoughtMaybe: Underground