“Back in the day when I was an aspiring young artist, one of my bibles was a well-worn copy (gotten at the late-great independent bookstore Paperbacks Unlimited) of Movie Journal, a collection of columns by filmmaker/impresario Jonas Mekas that had originally appeared in the Village Voice from 1959 to 1971, trumpeting trumpeting the rise of something called a ‘new American cinema.’ The working-class suburb northeast of Detroit where I grew up was hardly a hotbed of avant-garde culture, and Mekas’s compendium of rants and raves introduced me to a creative world I could only imagine via the descriptions he provided. The roll call of names—Stan Brakhage, Kenneth Anger, Jack Smith, Barbara Rubin, Carolee Schneeman, and dozens of others—was an elite group of underground luminaries to search out and from which to learn, not an easy task in the days before VCRs and DVDs, much less YouTube and Vimeo. … Mekas, who has taught film classes at The New School, is one of the true seminal figures of modern American cinema. In addition to creating some 75 experimental films over the past six decades, Mekas, along with his brother Adolphas, founded the pioneering magazine Film Culture in 1954. He also co-founded the nonprofit Film-Makers Cooperative distribution service in 1962, and perhaps most significant the Anthology Film Archives in 1970, one of the largest and most important collections of avant-garde film in the world, currently housed at 32 Second Avenue in Manhattan’s East Village. He has also written poetry in his native Lithuanian and published several of his personal journals and diaries. … From the beginning, Mekas made no bones about his agenda to advocate in the most passionate way possible for the cadre of emerging filmmakers of the time who were upsetting conventions in terms of subject matter, narrative form, and cinematic technique. …”
∞ mile
Criterion: Jonas Mekas and the “New American Cinema” (Video)
Interview Magazine: Jonas Mekas and the Weight of Memory
[PDF] The Rise of a New American Cinema, 1959 – 1971
amazon 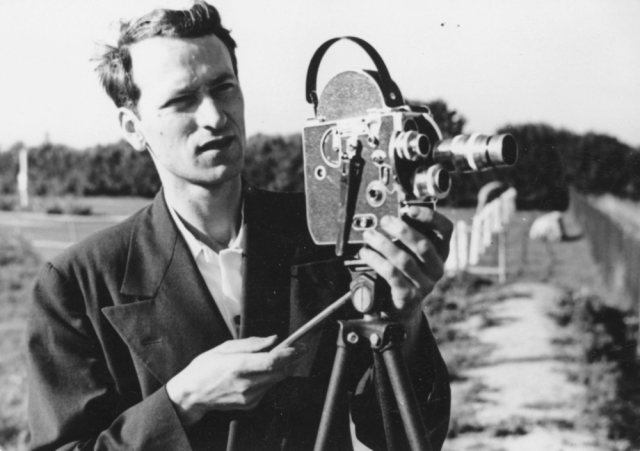 Myself, 1950, with the first Bolex. It worked fine until 1958 when Ray Wisniewski, a good friend, borrowed it to film the demonstrators of a nuclear ship entering the New York harbor. During a skirmish with the police he dropped it into the ocean. Being a good swimmer, he managed to retrieve it, but it never worked well again. Around the year 1959 I bought the second Bolex.