JFK Assassination Song: “The Motorcade Sped On” by Steinski

“November 22, 2013 will be the 50th anniversary of the assassination of President John F. Kennedy. This post is part of a series that will run throughout this year focusing on songs that address the JFK assassination. ‘The Motorcade Sped On’ by Steinski & The Mass Media is a hip hop sample-based sound collage that was initially released in 1986. This track takes sound clips from news reports of the Kennedy assassination along with samples of JFK’s speeches and arranges them over a sample of the drum pattern from the Rolling Stones’ ‘Honky Tonk Women.’ Steinski finds Walter Cronkite’s rhythmic groove in the phrases ‘More details just arrived’, ‘Mrs. Kennedy jumped up/she called, oh no” and rounded out with the phrase ‘the motorcade sped on’ to form the ‘chorus’ of the track. In addition to Walter Cronkite’s reports from CBS’s news coverage of the JFK assassination, the ‘verses’ contain samples from KBOX (Dallas) radio reporters  Sam Pate and Ron McAlister, who were covering Kennedy’s motorcade through Dallas, and Ike Pappas of WNEW (New York), who was reporting on developments surrounding the accused assassin Lee Harvey Oswald. ‘The Motorcade Sped On’ is arranged more or less in chronological order of how events unfolded in November, 1963. The first two verses of ‘The Motorcade Sped On’ includes initial reports of the assassination, in which the journalists struggled to make sense of what was going on during live coverage. Sam Pate and Ron McAlister were positioned at different locations on JFK’s motorcade route. Sam Pate was at Dealey Plaza where the shooting took place, and his reports make up most of the first verse. Ron McAlister was located farther down the route closer to the Trade Mart. His description of the chaos that erupted after the motorcade scrambled away from the site of the shooting make up the second verse. The third verse is Walter Cronkite’s announcement of President Kennedy’s death. Where the first three verses are all from November 22, 1963, the fourth verse shifts the focus to event two days later, with Ike Pappas reporting from the basement of the police station as Lee Harvey Oswald as he was being transferred to the county jail by the Dallas police. Ike Pappas was standing very close to Lee Harvey Oswald when he was gunned down by Jack Ruby. …”
Turn Me On, Dead Man (Video)
JFK50: An inside look at the DMN’s special section (Video)
The 5 Biggest Kennedy Conspiracy Theories
YouTube: Errol Morris JFK Assassination Documentary | NY Times
YouTube: The Motorcade Sped On – Stein/Steinski, The Motorcade Sped on – Coldcut & Steinski (my vid) 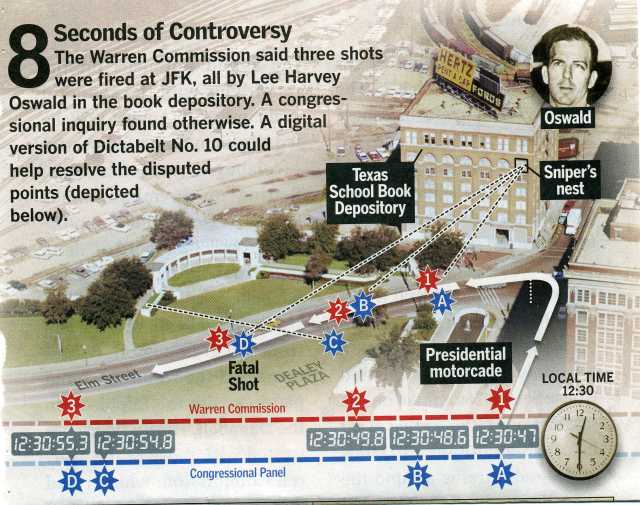