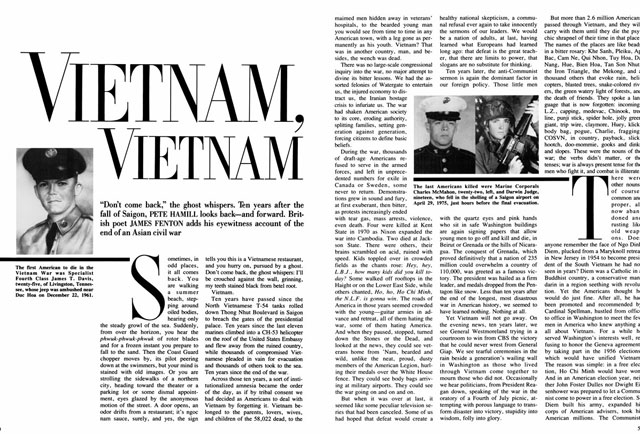 “Sometimes, in odd places, it all comes back. You are walking a summer beach, stepping around oiled bodies, hearing only the steady growl of the sea. Suddenly, from over the horizon, you hear the phwuk-phwuk-phwuk of rotor blades and for a frozen instant you prepare to fall to the sand. Then the Coast Guard chopper moves by, its pilot peering down at the swimmers, but your mind is stained with old images. Or you are strolling the sidewalks of a northern city, heading toward the theater or a parking lot or some dismal appointment, eyes glazed by the anonymous motion of the street. A door opens, an odor drifts from a restaurant; it’s ngoc nam sauce, surely, and yes, the sign tells you this is a Vietnamese restaurant, and you hurry on, pursued by a ghost. Don’t come back, the ghost whispers: I’ll be crouched against the wall, grinning, my teeth stained black from betel root. Vietnam. Ten years have passed since the North Vietnamese T-54 tanks rolled down Thong Nhut Boulevard in Saigon to breach the gates of the presidential palace. Ten years since the last eleven marines climbed into a CH-53 helicopter on the roof of the United States Embassy and flew away from the ruined country, while thousands of compromised Vietnamese pleaded in vain for evacuation and thousands of others took to the sea. Ten years since the end of the war. Across those ten years, a sort of institutionalized amnesia became the order of the day, as if by tribal consent we had decided as Americans to deal with Vietnam by forgetting it. Vietnam belonged to the parents, lovers, wives, and children of the 58,022 dead, to the maimed men hidden away in veterans’ hospitals, to the bearded young man you would see from time to time in any American town, with a leg gone as permanently as his youth. Vietnam? That was in another country, man, and besides, the wench was dead. There was no large-scale congressional inquiry into the war, no major attempt to divine its bitter lessons. We had the assorted felonies of Watergate to entertain us, the injured economy to distract us, the Iranian hostage crisis to infuriate us. The war had shaken American society to its core, eroding authority, splitting families, setting generation against generation, forcing citizens to define basic beliefs. During the war, thousands of draft-age Americans refused to serve in the armed forces, and left in unprecedented numbers for exile in Canada or Sweden, some never to return. Demonstrations grew in sound and fury, at first exuberant, then bitter, as protests increasingly ended with tear gas, mass arrests, violence, even death. …”
Vanity Fair 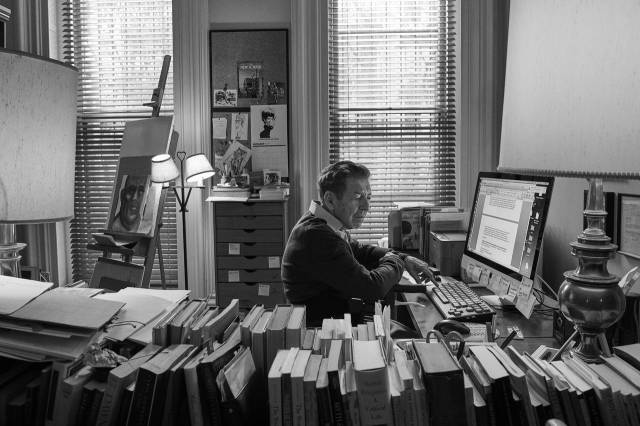