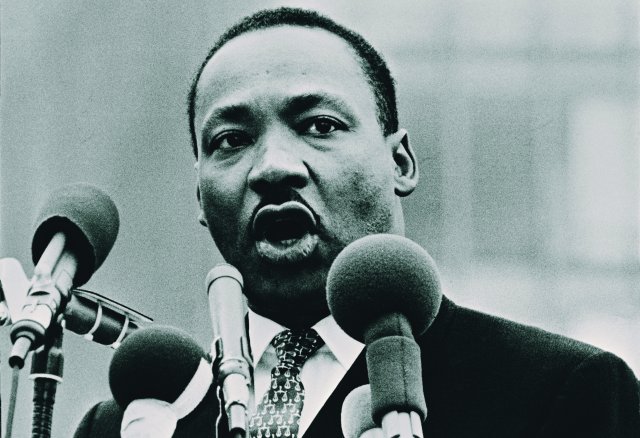 “Three major evils—the evil of racism, the evil of poverty, and the evil of war. These are the three things that I want to deal with today. Now let us turn first to the evil of racism. There can be no gainsaying of the fact that racism is still alive all over America. Racial injustice is still the Negro’s burden and America’s shame. And we must face the hard fact that many Americans would like to have a nation which is a democracy for white Americans but simultaneously a dictatorship over black Americans. We must face the fact that we still have much to do in the area of race relations. Now to be sure there has been some progress, and I would not want to overlook that. We’ve seen that progress a great deal here in our Southland. Probably the greatest area of this progress has been the breakdown of legal segregation. And so the movement in the South has profoundly shaken the entire edifice of segregation. And I am convinced that segregation is as dead as a doornail in its legal sense, and the only thing uncertain about it now is how costly some of the segregationists who still linger around will make the funeral. And so there has been progress. But we must not allow this progress to cause us to engage in a superficial, dangerous optimism. The plant of freedom has grown only a bud and not yet a flower. And there is no area of our country that can boast of clean hands in the area of brotherhood. Every city confronts a serious problem. Now there are those who are trying to say now that the civil rights movement is dead. I submit to you that it is more alive today than ever before. What they fail to realize is that we are now in a transition period. We are moving into a new phase of the struggle. For well now twelve years, the struggle was basically a struggle to end legal segregation. In a sense it was a struggle for decency. It was a struggle to get rid of all of the humiliation and the syndrome of depravation surrounding the system of legal segregation. And I need not remind you that those were glorious days. We cannot forget the days of Montgomery, when fifty thousand Negroes decided that it was ultimately more honorable to walk the streets in dignity than to accept segregation within, in humiliation. We will not forget the 1960 sit-in movement, when by the thousands students decided to sit in at lunch counters, protesting humiliation and segregation.  …”
The Atlantic