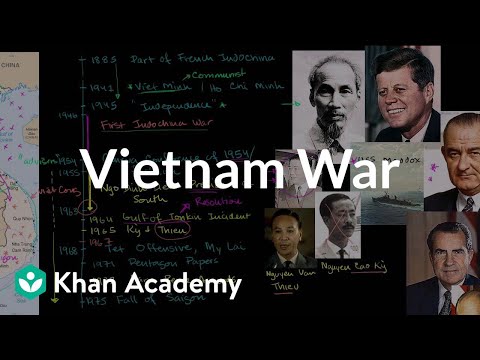 “… In order to have a respectable understanding of the Vietnam War, we have to rewind all the way back to the late 1800s when France was colonizing Southeast Asia. And in particular, it colonized what is now Laos, Vietnam, and Cambodia– and they were collectively called French Indochina. You can see Cambodia here, Vietnam along the coast, and then, Laos, right over here. And France stayed the colonizing power– I have a little gap in my timeline here– and they stayed a colonizing power all the way through World War II. And so you can imagine, during World War II, France was quickly overrun by the Germans. The Vietnamese wanted their independence, and so you have a liberation movement that rises up. And it was led by the Viet Minh, and the Viet Minh were led by Ho Chi Minh. This right here is a picture of Ho Chi Minh. And besides being a liberation movement, they were also communist, which, you could imagine, later on during the Cold War will kind of bias the United States against them. … And so you have the Geneva Conference of 1954 that partitions Vietnam along the 17th parallel between North Vietnam and South Vietnam. And the whole point of this partition was, really, to just allow for a cooling off period, a period where you can have thing settling down, and then having elections. It wasn’t meant to be a permanent partition. But there was a 300-day period where people could move across the partition. … We keep sending more and more advisers. It actually started even before [John] Kennedy, but Kennedy he starts sending– he escalates the number of advisers that gets sent. It’s still not, at this point, it’s still not a formal war. We haven’t officially declared– where we don’t have, officially, soldiers in battle. You fast forward to 1963, besides all of the great characteristics of Diem that I already mentioned, he also was into persecuting Buddhists. So to make matters worse, not only was he corrupt, not only did he not like elections, but he liked persecuting his own people. And by 1963, this kind of got out of hand, his level of persecution of the Buddhists. He started toward storming temples, and all the rest. And so he was assassinated. And not only was he assassinated, it kind of leaves this power vacuum, and you have all these people jockeying for control, none of these really especially savory characters inside the South. …”
Khan Academy (Video)
Khan Academy – The Vietnam War