“Apocalypse Now is a 1979 American epic war film directed, produced, and co-written by Francis Ford Coppola. It was co-written by John Milius with narration written by Michael Herr. It stars Marlon Brando, Robert Duvall, Martin Sheen, Frederic Forrest, Albert Hall, Sam Bottoms, Laurence Fishburne, and Dennis Hopper. The screenplay, written by Milius, adapts the story of Joseph Conrad‘s novella Heart of Darkness, changing its setting from late nineteenth-century Congo to the Vietnam War. It draws from Herr’s Dispatches and Werner Herzog‘s Aguirre, the Wrath of God (1972). The film revolves around Captain Benjamin L. Willard (Sheen), who is on a secret mission to assassinate Colonel Kurtz, a renegade Army officer who is presumed insane. The film has been noted for the problems encountered while making it, chronicled in the documentary Hearts of Darkness: A Filmmaker’s Apocalypse (1991). These problems included Brando arriving on the set overweight and completely unprepared, expensive sets being destroyed by severe weather, and Sheen having a breakdown and suffering a near-fatal heart attack while on location. Problems continued after production as the release was postponed several times while Coppola edited thousands of feet of film. Apocalypse Now was honored with the Palme d’Or at Cannes Film Festival, nominated for the Academy Award for Best Picture, and the Golden Globe Award for Best Motion Picture – Drama. … In 2000, the film was selected for preservation in the National Film Registry by the Library of Congress as being ‘culturally, historically or aesthetically significant’. … The longest section of added footage in the Redux version is a chapter involving the de Marais family’s rubber plantation, a holdover from the colonization of French Indochina, featuring Coppola’s two sons Gian-Carlo and Roman as children of the family. Around the dinner table, a young French child recites a poem by Charles Baudelaire entitled L’Albatros. The French family patriarch is not satisfied with the child’s recitation. The child is sent away. These scenes were removed from the 1979 cut, which premiered at Cannes. In behind-the-scenes footage in Hearts of Darkness, Coppola expresses his anger, on the set, at the technical limitations of the shot scenes, the result of tight allocation of resources. At the time of the Redux version, it was possible to digitally enhance the footage to accomplish Coppola’s vision. In the scenes, the French family patriarchs argue about the positive side of colonialism in Indochina and denounce the betrayal of the military men in the First Indochina War. Hubert de Marais argues that French politicians sacrificed entire battalions at Điện Biên Phủ, and tells Willard that the US created the Viet Cong (as the Viet Minh) to fend off Japanese invaders. …”
Wikipedia
W – Apocalypse Now Redux
Roger Ebert (Aug. 2001)
NY Times: Aching Heart Of Darkness by A. O. Scott (Aug. 2001)
amazon: Apocalypse Now (1979)/ Apocalypse Now Redux (2001)
YouTube: Apocalypse Now (1979) Official Trailer, French Plantation Sequence (Apocalypse Now Redux – 2) 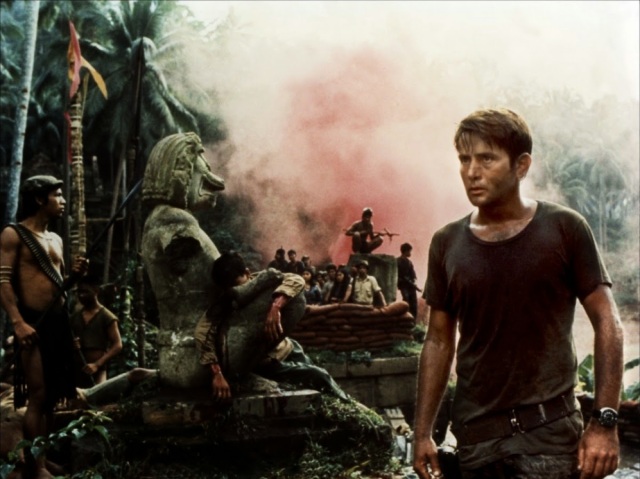