Dutch American artist Willem de Kooning (1904 – 1997) (center, with light hair) speaks with an unidentified couple at the top of a stoop next door to the Tanager Gallery (the storefront above the ‘Bar’ sign) on 10th Street, New York, New York, April 5, 1959.

“Perhaps no single photographer could be said to have captured the energy, the cultural ferment, the reverberating social change emanating from New York City in the second half of the 20th century as vividly as Fred W. McDarrah. McDarrah got his start covering the downtown beat of the Village Voice in the 1950s and ’60s, as that publication was defining a newly-emerged breed of independent journalism. McDarrah penetrated the lofts and coffeehouses of Lower Manhattan to shed light upon a new movement known as ‘The Beats’ and went on to capture on film the New York artists, activists, politicians, and poets who changed the way everyone else thought and lived. Through the generosity of the Estate of Fred W. McDarrah and the McDarrah family, the Greenwich Village Society for Historic Preservation was fortunate enough to add to its digital archive a dozen of the most epochal of Fred McDarrah’s images of downtown icons, including Andy Warhol, Bob Dylan, Jane Jacobs, and Allen Ginsberg. … Though you would barely know it today, in the 1950s the center of the art world was located in a string of scruffy artist-run galleries and studios on East 10th Street between 3rd and 4th Avenues that featured the emerging New York School of Abstract Expressionist painters. Central to that scene was Willem de Kooning, whom many critics say bore greater responsibility for shifting the center of the art world from Paris to New York than any other figure. From 1952 to 1962, during what was the height of his career, de Kooning maintained a studio at 88 East 10th Street, right in the center of the East 10th Street gallery row. De Kooning is pictured here on the front steps of his building with novelist Noel Clad, with the Tanger Gallery visible just next door above the bar. …”
6sqft
Esquire – New York’s Greenwich Village in the ’60s: The Photos
A Brief History Of Greenwich Village, NYC 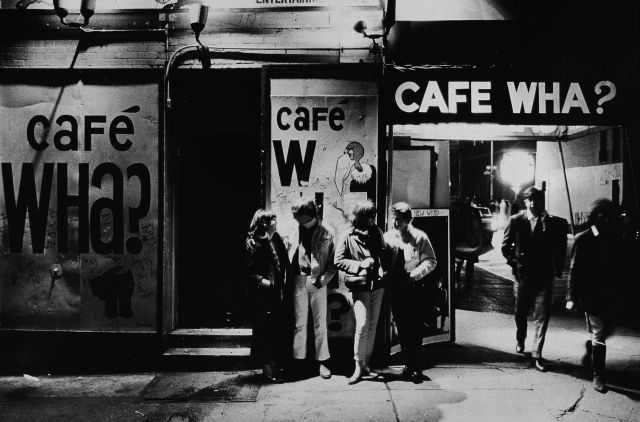 1 Response to The Urban Lens: From Bob Dylan to Jack Kerouac, see rare photos of the Village’s Beat Generation