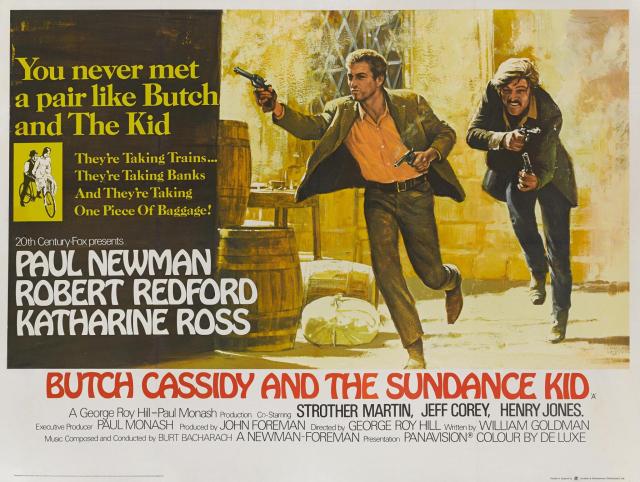 “‘The horse is dead.’ It’s the middle of a tense scene in the 1969 smash Butch Cassidy and the Sundance Kid. The town sheriff is attempting to round up a posse to track down Butch and Sundance, leaders of the Hole-In-The-Wall Gang, which has been robbing banks and trains with such impunity that they’ve become an embarrassment for lawman across the frontier. Unbeknown to everyone, these celebrity outlaws are watching the scene unfold from a perch across the street, where they’re blowing their loot on liquor and whores, but the sheriff’s recruitment efforts were doomed to run aground regardless. There just isn’t much appetite for going after an elusive and dangerous pair that seem to be generous in spreading their stolen loot around. There is, however, time for a brazen salesman to make a pitch: ‘The horse is dead,’ he says. The future is bicycles. The sequence everyone remembers from Butch Cassidy and the Sundance Kid follows shortly afterwards, when Paul Newman, as Butch, pedals Katherine Ross’s Etta Place around on the handlebars of a new bike, with the jaunty Oscar-winning song Raindrops Keep Fallin’ on My Head playing in the background. It may not be accurate to call the film a ‘revisionist western’ – a term reserved for less commercial visions like Monte Hellman’s The Shooting, Robert Altman’s McCabe & Mrs Miller, and Sam Peckinpah’s The Wild Bunch, released the same year – but even before our heroes meet a hail of bullets in the final freeze-frame, the end of an era is nigh. It’s no wonder Butch winds up chucking the bike into the woods later on. … Right away, Goldman establishes Butch as a charismatic mouthpiece for the quip-ready screenwriter, contrasting nicely with the Sundance Kid, Robert Redford’s taciturn sharpshooter. But he’s also created two heroes who break the western mold, neither justice-seeking white-hats nor grizzled, sneering black-hats, and not as traditionally masculine as either party. Butch is a man who appreciates beauty and art, but doesn’t have the stomach for violence; it’s not until late in the film that we (and the Kid) discover that he’s never shot a man before and he looks sickened to have to do it. …”
Guardian – Butch Cassidy and the Sundance Kid at 50: their charm lives on
Wikipedia
12 Wild Facts About Butch Cassidy and the Sundance Kid (Video)
YouTube: Butch Cassidy/Sundance Kid- Train robbery