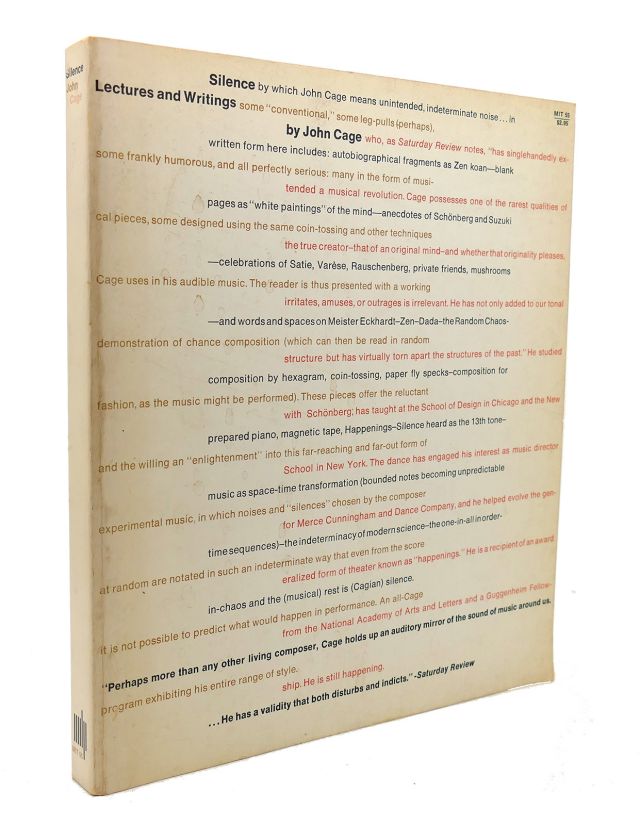 “This collection of essays and presentations by noted composer and musical innovator John Cage attempts to capture on paper both the intellectual and stylistic creativity with which he approached his work. In both the themes of the collection and the internal arrangement of the individual pieces, the author explores the nature of music, music’s relationship to sound, and the value of incorporating randomness into what had previously been an ordered, carefully considered art form. After a brief forward, in which he introduces the basic principles that formed both his theories and the writings (in this collection) that developed from them, the author’s first few essays discuss the practical manifestations of those principles—specifically, how they influenced the creation and performance of new and/or experimental music. Two further essays examine how both principle and practice were applied to the creation of three specific compositions, with introductory notes to all the essays (here and throughout the collection) relating the specific circumstances and/or techniques that went into their creation. The author then examines the development of modern/experimental music, both its theory and its applications in America, and offers brief, semi-biographical sketches of two of its earliest proponents. He then, in four essays, explores the ongoing development of the symbiotic, mutually beneficial relationship between modern music and modern dance, suggesting that the experience of each was expanded by the influence and incorporation of elements of the other. Finally, he also explores the parallels between these music/dance experiments (not to mention the intention behind them) and similar experiments and intentions manifesting in the world of visual art. … The book concludes with a collection of anecdotes, humorous but illuminating in tone and similar in both tone and content to the anecdotes appearing throughout the book, that further proves his central point that relationships between experiences may not always be apparent, but are always present. …”
Bookrags
W – Silence: Lectures and Writings
Google: Silence: Lectures and Writings
amazon: Silence: Lectures and Writings, 50th Anniversary Edition 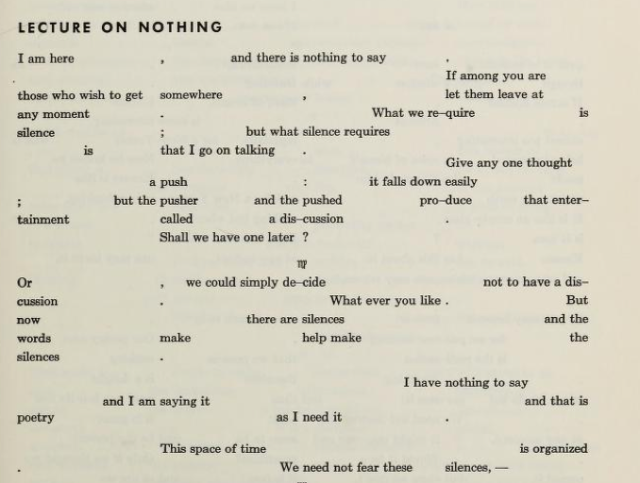