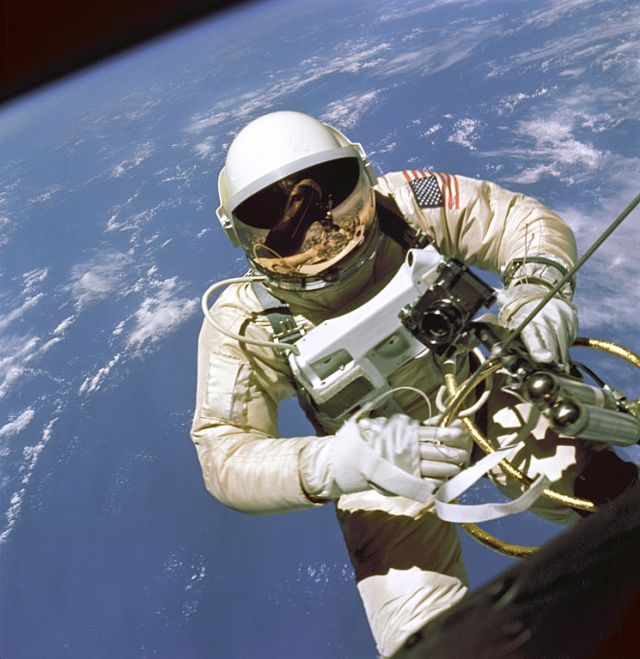 “Extravehicular activity (EVA) is any activity done by an astronaut outside a spacecraft beyond the Earth’s appreciable atmosphere. Normally, the term applies to what has been termed a spacewalk outside a craft that is orbiting Earth (such as the International Space Station). However EVA also applies to lunar surface exploration (commonly known as a moonwalk), as performed by six pairs of American astronauts in the Apollo program from 1969 to 1972. A Stand-up EVA (SEVA) is when an astronaut does not fully leave a spacecraft, but is completely reliant on the spacesuit for environmental support. Its name derives from the astronaut ‘standing up’ in the open hatch, usually to record or assist a spacewalking astronaut. The Soviet Union/Russia, the United States, Canada, the European Space Agency and China have all conducted EVAs. On March 18, 1965, Alexei Leonov became the first human to perform a spacewalk, exiting the capsule during the Voskhod 2 mission for 12 minutes and 9 seconds. On July 20, 1969, Neil Armstrong became the first human to perform a moonwalk, outside his lunar lander on Apollo 11 for 2 hours and 31 minutes. On the last three Moon missions astronauts also performed deep-space EVAs on the return to Earth, to retrieve film canisters from the outside of the spacecraft. American Astronauts Pete Conrad, Joseph Kerwin, and Paul Weitz also used EVA in 1973 to repair launch damage to Skylab, the United States’ first space station. … NASA planners invented the term extravehicular activity (abbreviated with the acronym EVA) in the early 1960s for the Apollo program to land men on the Moon, because the astronauts would leave the spacecraft to collect lunar material samples and deploy scientific experiments. To support this, and other Apollo objectives, the Gemini program was spun off to develop the capability for astronauts to work outside a two-man Earth orbiting spacecraft. …”
Wikipedia
YouTube: First American Spacewalk – Gemini IV., Rare color footage of first spacewalk, Alexey Leonov, March 18, 1965