Jajouka Or Joujouka? The Conflicted Legacy Of The Master Musicians

“‘Telephone Man’ was a gimbri player who used to play in the village of Joujouka (just as often spelled Jajouka), decades before mobile phones finally connected the hilltop base to the outside world around ten years ago. He would visit the village from his home in nearby Tatoft, hold his ear and tell the Joujouki he was receiving a message from someone who was planning to visit. To the amazement of the other residents, more often than not, his predictions came true. His story is one of many charming tales in the mythical folklore of Moroccan Sufi brotherhood The Master Musicians of Joujouka/Jajouka, who were described by William S. Burroughs as the ‘4,000-year-old rock ‘n’ roll band’. The tiny village in the Rif Mountains of northern Morocco has attracted and enchanted many visitors over the years, including Tangier-based artist Brion Gysin and Brian Jones of the Rolling Stones, both of whom had been introduced to the Master Musicians by Tangier-based artist, Mohamed ‘The Painter Of Morocco’ Hamri, who hailed from the village. How many of these influential guests were foreseen by Telephone Man remains unclear, but the group’s exposure to the wider world continued to grow as LSD guru Timothy Leary followed, writing of his experience in Jail Notes, and Ornette Coleman visited to make recordings with the group in 1973. However, their recent history has been overshadowed by a row between two separate groups who both claim to represent the rich musical heritage of the village. The wealth of misinformation and conflicting reports elsewhere means there is much to discourage potential fans from their ancient, transcendental music. In times gone by it was not uncommon for a group of fifty-plus Musicians to line up and wail their holy truth out and over the hills from their mountaintop home. However, today two smaller groups exist to keep the music alive: the Master Musicians of Joujouka, whose leader is Ahmed El Attar, and the Master Musicians of Jajouka Led By Bachir Attar. Whereas the Joujouka Musicians continue to live in the village and do not speak English, Bachir Attar has lived in New York and was taught English as a youth by American writer Paul Bowles. …”
The Quietus
W – Brian Jones Presents the Pipes of Pan at Joujouka
W – The Master Musicians of Joujouka
Brion Gysin, Copyright 1964: Brian Jones Presents the Pipes of Pan at Joujouka
Discogs (Video)
YouTube: Brian Jones presents The Pipes Of Pan At Joujouka (Full Album) 1968 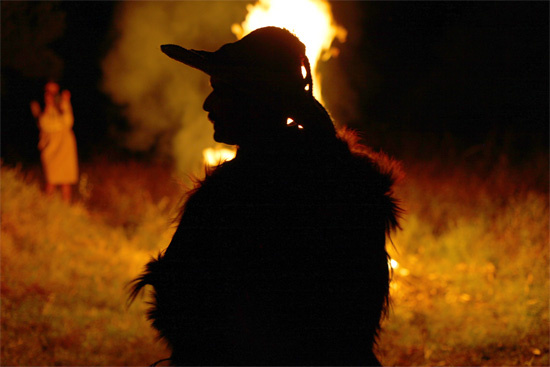