“Frantz Fanon, the Martiniquan born psychiatrist, committed Algerian revolutionary and pan-African thinker, died 60 years ago on 6 December 1961 just after the publication of his last book, The Wretched of the Earth. To mark this 60th anniversary, Nigel C Gibson has just published his collection, Fanon Today: The Reason and Revolt of the Wretched of the Earth. He discusses some important quotes from Fanon’s global classic. In the first chapter of The Wretched of the Earth, ‘On Violence’, Fanon describes colonialism as a system of absolute violence that can only be opposed through violence. He references South Africa as he powerfully describes the colonial world expressed in space: ‘The colonist’s sector is built to last … a sector of lights and paved roads, where the trash cans constantly overflow with strange and wonderful garbage, undreamed-of leftovers … The colonist’s sector is a sated, sluggish sector, its belly is permanently full of good things.’ In contrast, the colonised sector, ‘the shanty town, the Medina, the reservation … [is] a disreputable place inhabited by disreputable people. You are born anywhere, anyhow. You die anywhere, from anything. It’s a world with no space, people are piled one on top of the other, the shacks squeezed tightly together. The colonised’s sector is a famished sector, hungry for bread, meat, shoes, coal, and light.’ He then adds an important measure of decolonisation, ‘If we examine closely this system of compartments … its ordering and its geographical layout will allow us to mark out the lines on which a decolonised society will be reorganised.’ Fanon rocked the All-African People Conference in December 1958 when he raised the issue of violence in contrast to Kwame Nkrumah’s nonviolent ‘positive action’ agreed upon by many delegates. The following year Fanon became ambassador to Ghana and by then the crucial problem for Fanon was the lack of ideological clarity among leaders, regardless of their position on violence and nonviolence. The centrality of the ‘rationality of revolt’ to a ‘new politics’ is highlighted by these two quotes, from the end of chapter two and the beginning of chapter three. …”
NEW FRAME
NEW FRAME: Fanon and the ‘rationality of revolt’
NEW FRAME: Dancing with Fanon 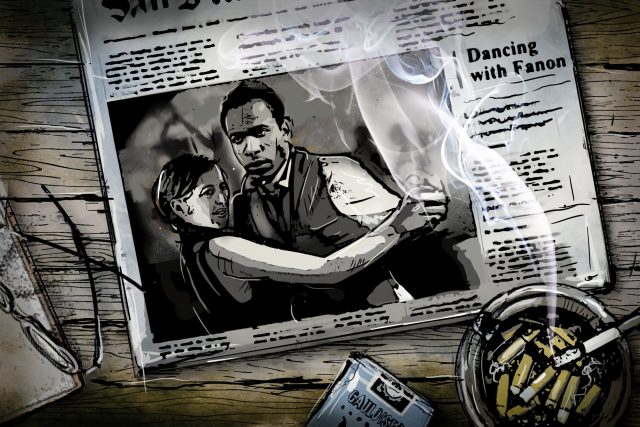