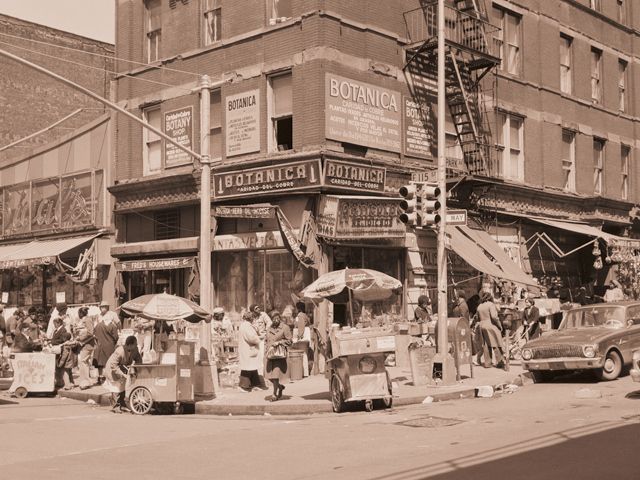 “East Harlem, also known as Spanish Harlem or El Barrio, is a neighborhood of Upper Manhattan, New York City, roughly encompassing the area north of the Upper East Side and bounded by 96th Street to the south, Fifth Avenue to the west, and the East and Harlem Rivers to the east and north. Despite its name, it is generally not considered to be a part of Harlem proper, but it is one of the neighborhoods included in Greater Harlem. … Southern Italians and Sicilians, with a moderate number of Northern Italians, soon predominated, especially in the area east of Lexington Avenue between 96th and 116th Streets and east of Madison Avenue between 116th and 125th Streets, with each street featuring people from different regions of Italy. The neighborhood became known as ‘Italian Harlem’, the Italian American hub of Manhattan; it was the first part of Manhattan to be referred to as ‘Little Italy‘. … Puerto Rican and Latin American migration after the First World War established an enclave at the western portion of East Harlem – around 110th Street and Lexington Avenue – which became known as ‘Spanish Harlem’. … Later, the name ‘El Barrio’ (‘The Neighborhood’) began to be used, especially by residents of the area. In the 1950s and 1960s, large sections of East Harlem were leveled for urban renewal projects, and the neighborhood was one of the hardest hit areas in the 1960s and 1970s as New York City struggled with deficits, race riots, urban flight, gang warfare, drug abuse, crime and poverty. Tenements were crowded, poorly maintained, and frequent targets for arson. In 1969 and 1970, a regional chapter of the Young Lords which were reorganized from a neighborhood street gang in Chicago by Jose (Cha-Cha) Jimenez, ran several programs including a Free Breakfast for Children and a Free Health Clinic to help Latino and poor families. The Young Lords came together with the Black Panthers and called for Puerto Rican independence and neighborhood empowerment. …”
Wikipedia
NY Times: Spanish Harlem on His Mind
Latino Art in NYC: A Short History of El Museo del Barrio
W – La Marqueta
NY Times: Honoring Latinx Art, Personal and Political