“Blame it on the Madison. Or blame it on Arthur, Franz, and Odile’s gleeful race through the Louvre in an attempt to break the world record (held by an American, of course) for the quickest visit ever. Blame it on the minute of silence; the way the director credits himself as ‘Jean-Luc Cinéma Godard’; the way our heroes pass under a stylish neon sign on the place de Clichy that reads ‘Nouvelle Vague.’ But most of all, blame it on the Madison dance sequence, later to be quoted by a parade of hip directors, that 1964’s Band of Outsiders at first seems a film of gestures rather than a singular, coherent drama. Utterly seductive in its digressions, limned with Parisian nostalgia and metafilmic quips, it’s a movie in which the flimsy caper plot risks seeming pure pretext. ‘Un plan?’ asks Odile, turning directly to the camera. ‘Pourquoi?’ Arrogantly sans souci, such a strategy could have stumbled—particularly for a director just off his first bomb, Les carabiniers, and, perhaps just as disconcertingly, the success of his CinemaScope stab at the mainstream, Contempt (both 1963). But the gestures themselves are sure-footed, and too seductively goofy to dislike. And not even the narrator (Godard himself) seems capable of taking the main action too seriously: ‘A few words chosen at random,’ begins the underwhelming overture. ‘Three weeks earlier. A pile of money. An English class. A house by the river. A romantic girl.’ Sure, but what’s that against the infinitely charming terpsichorean savoir faire of Arthur, Franz, and Odile? Godard claims to have invented the dance, but he didn’t, any more than he invented the quotes from Rimbaud, Breton, Éluard, Queneau, and the rest. It came from America. … For all of this, for all the sense of assemblage and borrowing, for all the silliness and set pieces, Band of Outsiders is a movie with a main motion—not that of a noir or a policier but of a love story. Like so many Godard films, it’s a love story with a bullet in it. And like the most fiercely involved romances, it’s a map of difficult frontiers: between big city and still rustic suburbs, prewar particularity and the masses of mass culture, natural light and the color of money. …”
Criterion – Band of Outsiders: Madison-sur-Seine
Criterion (Video)
New Republic: Godard Among the Gangsters – Pauline Kael (Sep. 1966)
W – Band of Outsiders
YouTube: Band of Outsiders (1964) ORIGINAL TRAILER 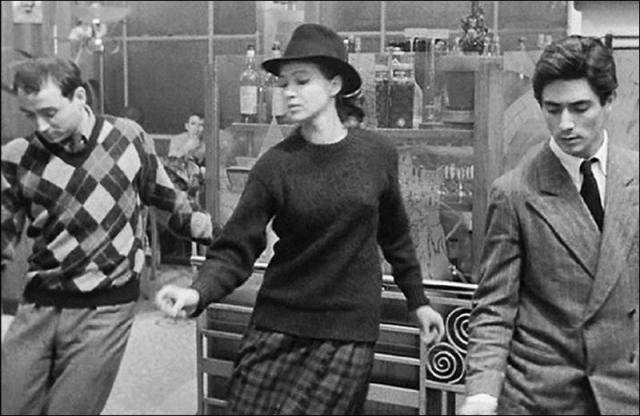