The Concert for Bangladesh 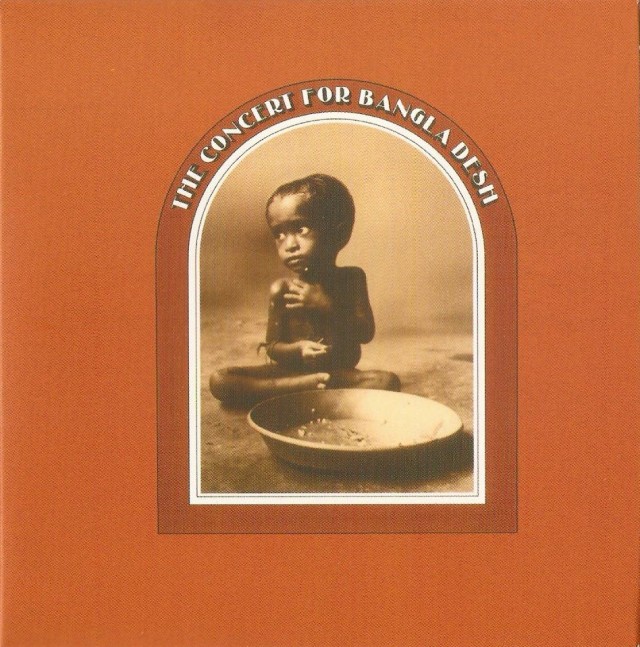 “The Concert for Bangladesh (or Bangla Desh, as the country’s name was originally spelt) was a pair of benefit concerts organised by former Beatles guitarist George Harrison and Indian sitar player Ravi Shankar. The shows were held at 2:30 and 8:00 pm on Sunday, 1 August 1971, at Madison Square Garden in New York City, to raise international awareness of, and fund relief for refugees from East Pakistan, following the Bangladesh Liberation War-related genocide. The concerts were followed by a bestselling live album, a boxed three-record set, and Apple Films‘ concert documentary, which opened in cinemas in the spring of 1972. The event was the first-ever benefit of such a magnitude, and featured a supergroup of performers that included Harrison, fellow ex-Beatle Ringo Starr, Bob Dylan, Eric Clapton, Billy Preston, Leon Russell and the band Badfinger. In addition, Shankar and Ali Akbar Khan – both of whom had ancestral roots in Bangladesh – performed an opening set of Indian classical music. The concerts were attended by a total of 40,000 people, and the initial gate receipts raised close to $250,000 for Bangladesh relief, which was administered by UNICEF. … As East Pakistan struggled to become the separate state of Bangladesh during the 1971 Bangladesh Liberation War, the political and military turmoil and associated atrocities led to a massive refugee problem, with at least 7 million displaced people pouring into neighbouring India. East Pakistan had recently endured devastation as a result of the Bhola cyclone, and the Bengalis‘ desperate plight increased in March that year when torrential rains and floods arrived in the region,[10] threatening a humanitarian disaster. … Towards the end of the month, when all parties were due to meet in New York for rehearsals, Harrison had the commitment of a backing band comprising: Preston, on keyboards; the four members of Badfinger, on acoustic rhythm guitars and tambourine; Voormann and Keltner, on bass and drums, respectively; and saxophonist Jim Horn‘s so-called ‘Hollywood Horns’, which included Chuck Findley, Jackie Kelso and Lou McCreary. Of the established stars, Leon Russell had committed also, but on the proviso that he be supported by members of his tour band. …”
Wikipedia
Discogs (Video)
vimeo: George Harrison – The Concert for Bangladesh 1:38:57
amazon

1 Response to The Concert for Bangladesh