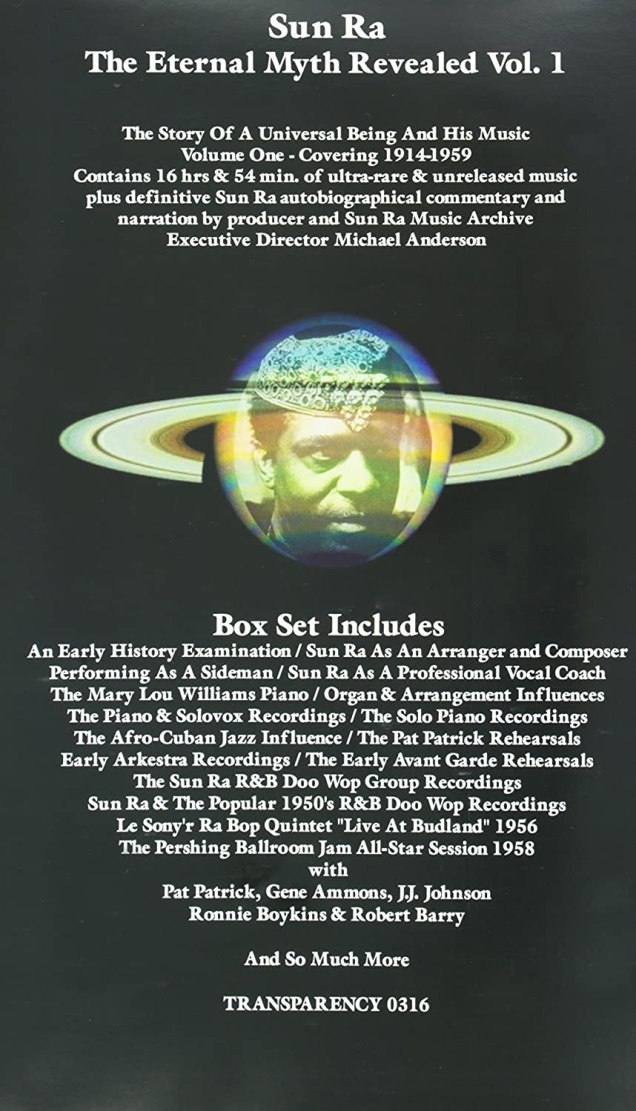 “… The Eternal Myth Revealed is a 14 disc docu-biography of Ra’s life and career, from his birth in 1914 up to 1959. In addition to his own music, it includes music he was influenced by, and a lot of stuff he may or may not have had a hand in as arranger, vocal coach, pianist or something else. Sun Ra’s output was as prolific as Ellington’s, and discographers have had nightmares and arguments attempting to document it accurately. This mammoth box set will raise as many questions as it sets out to answer, and will no doubt inspire controversy in a few corners. It’s 17 hours of history and music, and it’s riveting. I listened to it over a weekend, in two seven disc stretches. Then I dumped a bunch of the music into my iTunes. The auteur behind this landmark is Michael D. Anderson, whose knowledge of jazz, rhythm ‘n’ blues, blues, Latin music and other styles is pretty staggering. His archival command of pre-war jazz and blues makes me hopeful that he will write a book about this stuff. EMR strips away element by element that almost insulting view of Ra as a hodgepodge crackpot from out of nowhere. Moving between Anderson’s own narration are threads of Ra’s own recollections, with relevant comments from Ray Charles, Coleman Hawkins, Bobby Blue Bland and a few other heavyweights. A vivid portrait of a black music world transforming itself emerges, as does a clear picture of Ra as a musician living at the crossroads of his time, very much a thorough professional but also a restless experimenter and (to use Uri Caine‘s expression) checker-outter. Ra was singular but no fluke, and Anderson does a fantastic job of tying together the threads of his influences. He knows his subject deeply, and does not shy away from editorializing and speculating. The approach is bound to infuriate the more scholarly types, but it fits Ra very well. Anderson’s musical selections—not only of Ra’s own music, but of the music from which Ra drew as well, are spotless—and his taste is impeccable. …”
All About Jazz
allmusic (Audio)
YouTube: The Eternal Myth Revealed – CD Box Set – Promo Video Part 1, Part 2