Paul Bowles: ‘Here’s My Message. Everything Gets Worse’ by Paul Theroux 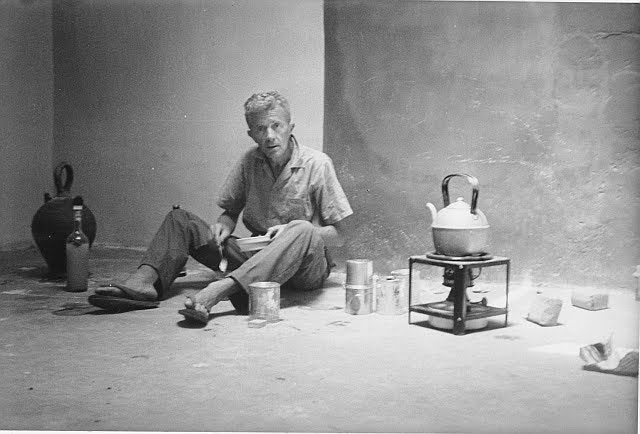 “The Sheltering Sky was Paul Bowles’s first novel, and although he honed his art almost to his dying day—novels, poems, stories, translations, as well as musical scores—it was this strange, uneven, and somewhat hallucinatory novel, and a handful of disturbing short stories written around the same time, that seemed to locate his fictional vision for good in the minds of his readers. So at the age of 38 he was defined, and that definition dogged him for the rest of his life. Even in his eighties he was pestered about details in the novel. I know this to be true because I was one of the people pestering him when he was that great age. I found him sitting on the floor of a back room in a large chilly apartment in a gray building on a back street in Tangier. It was October and clammy cold. To drive the dampness away Bowles had a sort of superior blowtorch going, a fizzing blue flame heating the curtained-off cubicle, where he was seated like a hawker in a bazaar, on a mat, back straight, legs out, because of a leg infection. Around him was a litter of small objects: notebooks, pens, medicine bottles—everything within reach—a teapot, a cup, spoons, matches, and shelves with books and papers, some of them musical scores. A metronome sat on a low table nearby, among bottles of capsules and tubes of ointment, and cassette tapes and a tin of Nesquik and cough drops and a partly eaten candy bar and a note folded and jammed into an envelope scribbled Paul Bowles, Tanger, Maroc, a vague address but it had obviously found him, as I had, with little more information than that. With a pad in his hand, he was translating a novel from Spanish. His illness and his age gave him a strangely sculpted and skeletal dignity. He seemed sure of himself, and (as a chronic vacillator myself) I admired him for being uncompromising. Because I did not want to inhibit his talk by taking notes of our conversation, I stopped in a café, the Negresco, on the way back to my hotel and described this meeting in my notebook. I wanted to make it an episode for the end of my Mediterranean journey, the book I was to call The Pillars of Hercules. I wrote, He seems to me a man who masks all feelings; he has a glittering eye but a cold gaze. He seems at once preoccupied, knowledgeable, worldly, remote, detached, vain, skeptical, eccentric, self-sufficient, indestructible, fragile, egomaniacal, frank, and hospitable to praise. He is like almost every other writer I have known in my life. Seeing me scribbling, a Moroccan sitting nearby asked if I happened to be a writer. His name was Mohamed Choukri. He knew Bowles, because Bowles translated his first and best-known novel, For Bread Alone. He disparaged him in a genial way, then said, ‘He is a nihilist.’ …”
LitHub
Tellus #23 ‘The Voices of Paul Bowles’
UbuWeb: Tellus #23 (Audio), Soundcloud: “Allal”
amazon: The Stories of Paul Bowles

1 Response to Paul Bowles: ‘Here’s My Message. Everything Gets Worse’ by Paul Theroux