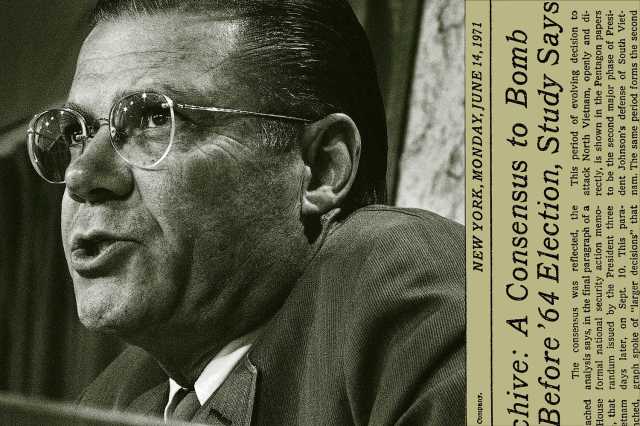 “On Oct. 1, 1969, Daniel Ellsberg walked out of the RAND Corporation offices, where he worked as a Defense Department consultant, into the temperate evening air of Santa Monica, Calif. In his briefcase was part of a classified government study that chronicled 22 years of failed United States involvement in Vietnam. By then, the war had killed about 45,000 Americans and hundreds of thousands of Vietnamese. He had been posted in Vietnam, and even worked on the study he now carried. Having become convinced that the war was not only unwinnable but also a crime, he was now determined to stop it.  …”
NY Times

Hear From the Woman Who Researched the Pentagon Papers in Secret “In the spring of 1971, Linda Amster could not tell anyone what she was doing — not her husband, not her friends and not even her colleagues at the New York Times news research desk. Working seven days a week, she shuttled between the Times headquarters and a block of rooms at the Hilton Hotel, where thousands of pages of documents were stacked high, many of them stamped ‘TOP SECRET.’ …” NY Times: Listen to the Pentagon Papers Researcher Tell Her Story (Audio)

Leaning on Journalists and Targeting Sources, for 50 Years “… But inside the legal department of The Times, there was debate about whether the new president — who had called the press the ‘enemy of the people’ — would try to re-litigate the Pentagon Papers case and slap The Times with prior restraint to prevent publication. Or would he seek to prosecute reporters under the century-old Espionage Act? No one knew. …” NY Times

In Vietnam, the Pentagon Papers Are History Written by the Defeated “The Pentagon Papers may have been all over the front pages of U.S. newspapers 50 years ago, but they were barely noticed in Hanoi. Communist leaders were too busy fighting their war in the present to look at its history. Besides, the contents of the papers only served to confirm their longstanding notions. By the time “Vietnam Archive: Pentagon Study Traces Three Decades of Growing U.S. Involvement” appeared on the front page of The New York Times on June 13, 1971, the North Vietnamese government had been claiming for years that American military involvement was illegitimate. …” NY Times

The Secrets and Lies of the Vietnam War, Exposed in One Epic Document “Brandishing a captured Chinese machine gun, Secretary of Defense Robert S. McNamara appeared at a televised news conference in the spring of 1965. The United States had just sent its first combat troops to South Vietnam, and the new push, he boasted, was further wearing down the beleaguered Vietcong. ‘In the past four and one-half years, the Vietcong, the Communists, have lost 89,000 men,’ he said. ‘You can see the heavy drain.’ That was a lie. From confidential reports, McNamara knew the situation was ‘bad and deteriorating’ in the South. …” NY Times

A First Amendment Case That Made an ‘Incoherent State of the Law’ “The Pentagon Papers case was a triumph for press freedom. Or was it? The Supreme Court’s unsigned opinion rejecting the Nixon administration’s attempt to censor publication of a secret history of the Vietnam War was just three paragraphs long and declared only that the government had not overcome a ‘heavy presumption’ against prior restraints — on that occasion. The vote was, moreover, fairly close — 6 to 3. …” NY Times

Washington’s Daily Secret Machine “One night during the legal battle over the Pentagon Papers, Max Frankel was stewing with anger. Mr. Frankel, then the Washington bureau chief of The New York Times, remembered that he was the only one at the table during the newspaper’s deliberations with its legal team who had actually read the papers. Yet he was stunned when the outside lawyers hired by the newspaper to defend it asserted that the journalists had somehow erred by publishing national secrets. …” NY Times