“This is a web version of Aspen, a multimedia magazine of the arts published by Phyllis Johnson from 1965 to 1971. Each issue came in a customized box filled with booklets, phonograph recordings, posters, postcards — one issue even included a spool of Super-8 movie film. It’s all here. Aspen was conceived by Phyllis Johnson, a former editor for Women’s Wear Daily and Advertising Age. While wintering in Aspen, Colorado, she got the idea for a multimedia magazine, designed by artists, that would showcase ‘culture along with play.’ So in the winter of 1965, she published her first issue. ‘We wanted to get away from the bound magazine format, which is really quite restrictive,’ said Johnson. Each issue had a new designer and editor. ‘Aspen,’ Johnson said, ‘should be a time capsule of a certain period, point of view, or person.’ The subject matter of issue number 1 and issue number 2 stayed close to the magazine’s namesake ski spa, with features on Aspen’s film and music festivals, skiing, mountain wildlife, and local architecture. Andy Warhol and David Dalton broke that mold with issue number 3, the superb Pop Art issue, devoted to New York art and counterculture scenes. Quentin Fiore designed issue number 4, a McLuhanesque look at our media-made society. The next issue, a double issue number 5+6, was an imaginative, wide-ranging look at conceptual art, minimalist art, and postmodern critical theory. Issue number 6A, a freebie sent to ever-patient subscribers, was a review of the performance art scene centered at New York’s Judson Gallery. Next came issue number 7, exploring new voices in British arts and culture. Issue number 8, designed by George Maciunas and edited by Dan Graham, was dominated by artists of the Fluxus group. Issue number 9 plumbed the art and literature of the psychedelic drug movement. The last Aspen, issue number 10, was devoted to Asian art and philosophy. If Aspen was an art director’s dream, it was also an advertiser’s nightmare. … Perhaps Aspen was a folly, but it was a vastly pleasurable one, with a significant place in art history. The list of contributors included some of the most interesting artists of the 20th Century. … Almost every issue of Aspen included at least one phonograph recording. In all, the magazine issued 13 flexi-discs showcasing 24 artists who ran the gamut of avant garde literature, art, and sonic experimentation. Except for two recordings — a jam by the Bill Evans Trio and a reading by William S. Burroughs — all were made expressly for Aspen. All the Aspen recordings are included here in forty audio exhibits, in both Real Audio and mp3 formats. …”
UbuWeb: Aspen – The multimedia magazine in a box (Video)
UbuWeb: Aspen – Index of Artists & Authors
W – Aspen (magazine)
YouTube: Archive Curator Nayia Yiakoumaki introduces Aspen Magazine 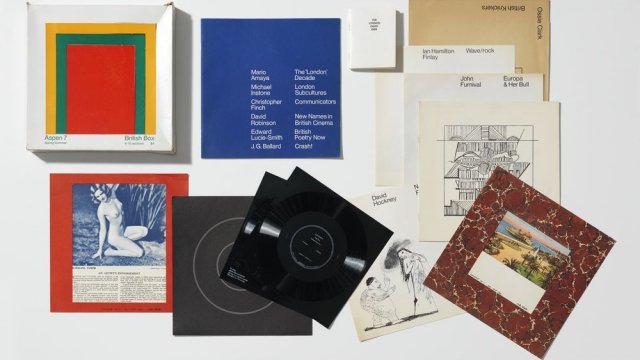