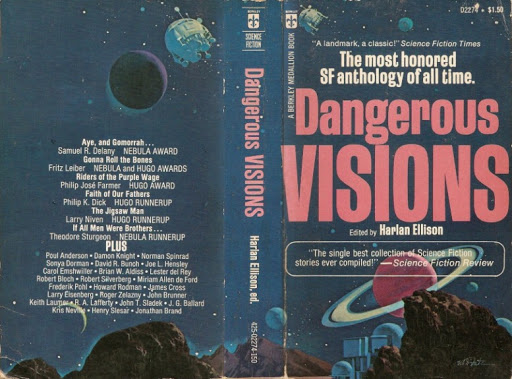 “Dangerous Visions is a science fiction short story anthology edited by American writer Harlan Ellison and illustrated by Leo and Diane Dillon. It was published in 1967. A path-breaking collection, Dangerous Visions helped define the New Wave science fiction movement, particularly in its depiction of sex in science fiction. Writer/editor Al Sarrantonio writes how Dangerous Visions ‘almost single-handedly […] changed the way readers thought about science fiction.’ Contributors to the volume included 20 authors who had won, or would win, a Hugo, Nebula, World Fantasy, or BSFA award, and 16 with multiple such awards. Ellison introduced the anthology both collectively and individually while authors provided afterwords to their own stories. Advertisements described Dangerous Visions as ‘For the first time anywhere—33 great new stories by all the science fiction masters of our time’, and ‘Not collected from magazines, not collected from other books … one of the biggest anthologies of original material ever assembled in any field’. The stories and the anthology itself were nominated for and received many awards. ‘Gonna Roll the Bones‘ by Fritz Leiber received both a Hugo Award and a Nebula Award for Best novelette, whilst Philip K. Dick‘s submission ‘Faith of Our Fathers’ was a nominee for the Hugo in the same category. Philip José Farmer tied for the Hugo Award for Best Novella for ‘Riders of the Purple Wage‘. Samuel R. Delany won the Nebula for Best Short Story for ‘Aye, and Gomorrah…‘ Harlan Ellison received a special citation at the 26th World SF Convention for editing ‘the most significant and controversial SF book published in 1967.’ ‘You should buy this book immediately’, Algis Budrys wrote, ‘because this is a book that knows perfectly that you are seething inside’. He especially praised ‘Sex and/or Mr. Morrison‘. Dave Langford reviewed Dangerous Visions for White Dwarf #94, and stated that ‘poked at all SF’s taboos, remains a quicky mix of achievement and hype, of stories still brilliantly fresh and stories already moribund two decades ago.’ The popular collection was followed by an even larger 1972 sequel, Again, Dangerous Visions. The projected third collection, The Last Dangerous Visions, was started, but controversially remains unpublished. The final book has become something of a legend as science fiction’s most famous unpublished book. It was originally announced for publication in 1973, but other work demanded Ellison’s attention and the anthology has not seen print to date. He has come under criticism for his treatment of some writers who submitted their stories to him, whom some estimate to number nearly 150 (and many of whom have died in the ensuing more than four decades since the anthology was first announced). …”
Wikipedia
A Look Back at Harlan Ellison’s Dangerous Visions by Ted Gioia
[PDF] Dangerous Visions
amazon 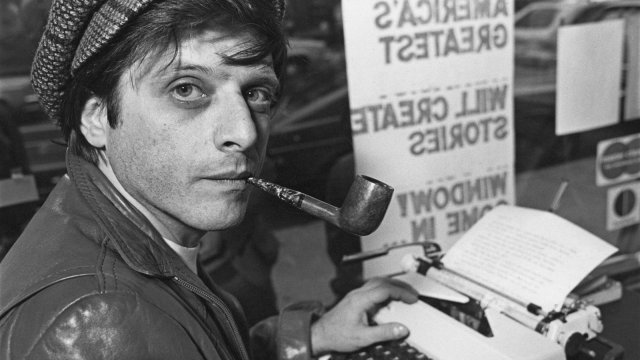