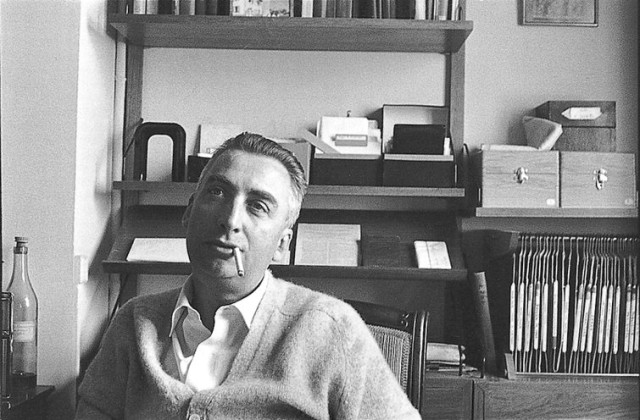 “Ecclesiastes famously warns us that ‘Of making many books there is no end’ – the same, of course, applies to book commentaries. George Steiner has long denounced the ‘mandarin madness of secondary discourse’ which increasingly interposes itself between readers and works of fiction. For better or worse, the internet – with its myriad book sites – has taken this phenomenon to a whole new level. Since Aristotle’s Poetics, literature has always given rise to its exegesis, but now that no scrap of literary gossip goes untweeted, it may be time to reflect a little on the activity of literary criticism. I have chosen to inaugurate this series with a few considerations on ‘The Death of the Author’ because of its truly iconic nature: it symbolises the rise of what would come to be known as “theory”. Even if he never names them, Roland Barthes (like Proust before him) launches an attack on the traditional biography-based criticism à la Sainte-Beuve or Lanson which still dominated French academia in the sixties. The paradox, of course, is that this essay – with its symbolic slaying of the paternal ‘Author-God’ – could lend itself to a textbook psychological reading given that Barthes lost his own father before his first birthday. The ‘Death of the Author’ theme itself takes on added meaning, in hindsight, when you consider that Barthes’s critical career was, at least in part, a displacement activity to avoid writing the novel he dreamed of. Does any of this invalidate his theories? I’ll let you be the judge of that… In 2002, the prestigious Pompidou Centre in Paris devoted a major exhibition, not to an artist, philosopher, scientist or novelist, but a literary critic: Roland Barthes. Now that the ‘theory wars’ – which had once torn apart literature departments on both sides of the Atlantic – were largely over, it served as a reminder of a time when a posse of structuralists and post-structuralists superseded the likes of Jean-Paul Sartre as France’s premier intellectual icons. Many of them were primarily philosophers, anthropologists, historians, linguists or psychoanalysts – Jacques Lacan, Michel Foucault, Gilles Deleuze, Julia Kristeva et al – but the locus of this intellectual revolution was undoubtedly literary criticism. La nouvelle critique was flavour of the month, much like its culinary counterpart, nouvelle cuisine, albeit more of a mouthful. Critics-cum-thinkers such as Barthes himself – who was equally at home at the lofty Collège de France or down the trendy Le Palace nightclub – achieved bona fide celebrity status. Their works often became bestsellers in spite of their demanding and iconoclastic nature. Soon, NME journalists were peppering their articles with arcane references to Baudrillard while Scritti Politti dedicated a postmodern ditty to Jacques Derrida. The whole movement seemed as provocative, and indeed exciting, as Brigitte Bardot in her slinky, sex kitten heyday. Its defining moment was the publication of a racy little number called ‘The Death of the Author’. …”
Guardian – In theory: The Death of the Author
How much resonance does Roland Barthes’ The Death of the Author really have?
[PDF] The Death of the Author
YouTube: The Death of the Author: WTF? Roland Barthes’ Death of the Author Explained | Tom Nicholas