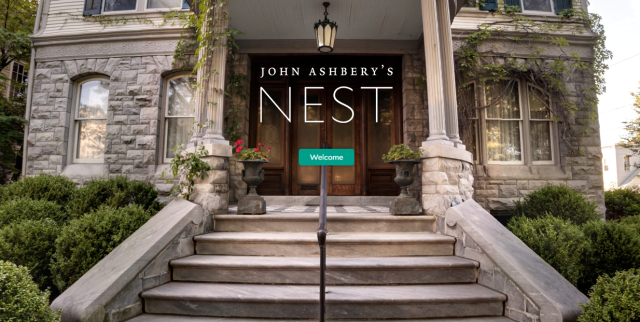 “‘John Ashbery’s Nest’ is a website centered on a virtual tour of the Victorian home of American poet, collagist, art critic and collector John Ashbery (1927-2017).  The site provides a unique opportunity not only to see the art, objects, books and furniture in this house–the only home Ashbery has ever owned–but also to hear Ashbery read from related poems and talk about the provenance and resonance that these things, including the space itself, have played in his creative life.  Ideally a visit to the interior of the (virtual) house makes one want to return to the interior life of the poems and vice versa, each illuminating the other. Ashbery purchased the home in Hudson, New York at the age of fifty-one in 1978 and painstakingly restored and decorated it over a fifteen-year period.  Using the 4000 square-foot house as a place to display his many collections of small decorative objects, ceramics, furniture and art work, each of the fourteen rooms provides an original frame for his unique assemblages. In exploring the sights and sounds of the Hudson house, we hope you will experience the wonder and intimacy of being in ‘the middle of things,’ a reality that echoes in Ashbery’s poems. Hear John Ashbery read his poems.  Listen as Ashbery discusses the history of the house and the provenance of furniture and objects with his husband David Kermani. Learn more about Ashbery’s long interest in houses and collections and the ways these personal interests play out in his poetry, art criticism and collages and vice versa. Explorations: Still and 360 Photography, Audio and Additional Text, Poetry. In collaboration between the Yale Digital Humanities Lab, Yale ITS and VR Habitat, each room includes 360 photography, panoramas and still photography.  A viewer can: move through each room and view objects closely; listen to audio of John Ashbery, David Kermani and other artists and collectors discussing the provenance of objects; read additional archival details on objects and rooms; learn more about Ashbery’s background, including highlights from his lifelong fascination with houses and collecting; explore links to related Ashbery poems highlighting the relationship between physical objects and poetic imagination. …”
Introduction
Ashbery House: History of the Hudson House
John Ashbery’s Nest 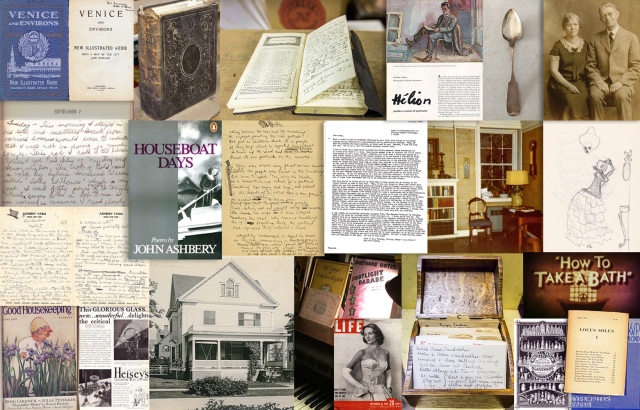 Karin Roffman: a sampling of literary, biographical, material, and and unknown research materials discovered for Nest