“Like many readers, I suspect, I first came across the name Mohammed Mrabet in relation to Paul Bowles. Throughout the sixties, seventies, and eighties, everyone from Life magazine to Rolling Stone sent writers and photographers to Tangier—where Bowles had been living since 1947—to interview the famous American expat, author of the cult classic The Sheltering Sky. … In fact, he kept open house for one and all, whether they be curious tourists, his famous friends—Tennessee Williams, William S. Burroughs, and Allen Ginsberg among them—or the crowd of Moroccan storytellers and artists he’d befriended over the years. And of these, one man in particular stands out: Mohammed Mrabet. Bowles and Mrabet met in the early sixties, and they remained close until Bowles’s death four decades later in 1999. Mrabet worked for Bowles in various capacities: as a driver, a cook, general handyman, and sometime traveling companion. But theirs was much more intimate a relationship than that of employer and employee. They were friends—and it’s assumed, at one time or other, lovers, too—but most importantly, artistic collaborators. Throughout the sixties, Bowles increasingly turned his attention to translating. … But what started out as a piecemeal activity that could be squeezed in between the demands of caring for his spouse soon became an impressive project in and of its own right. Bowles worked with oral storytellers who hadn’t learned to read and write, Mrabet included. Thus, in taping, transcribing, and translating their tales, he was, as [Jay] McInerney points out, ‘virtually inventing a new genre.’ He also developed close bonds with many of the men he worked with. Take, for example, the writer, playwright, and painter Ahmed Yacoubi, who was Bowles’s protégé (and most likely also his lover) until he emigrated to New York in 1966. But his collaboration with Mrabet was by far the longest of these relationships. The first project they worked on together was 1967’s novel-length Love with a Few Hairs—the story of a young man who pays a witch to cast a spell over the girl he loves so she will agree to marry him, and which the New York Times declared ‘an engaging and readable story, often touching in its account of a Moroccan youth still in the grip of old tenets and customs while struggling with the new’—and the last was Chocolate Creams and Dollars in 1992. In between they coproduced another eleven volumes, mostly stories, but also Mrabet’s memoir, Look and Move On. …”
The Paris Review
W – Mohamed Mrabet
Mohamed Mrabet: Biography
Mohammed Mrabet: Fish soup
amazon: Mohammed Mrabet 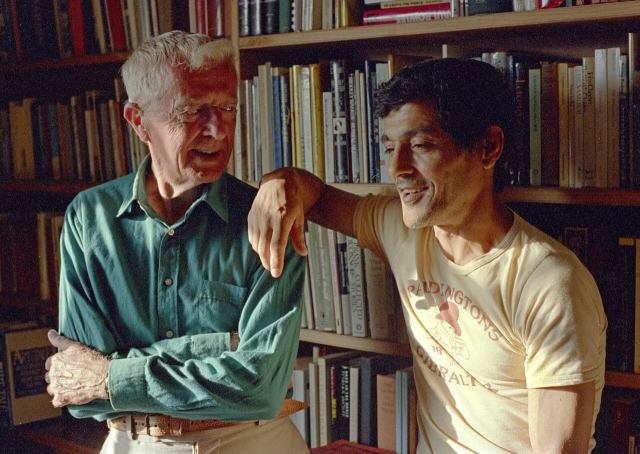 1 Response to The Storyteller of Tangier – Mohammed Mrabet / Paul Bowles