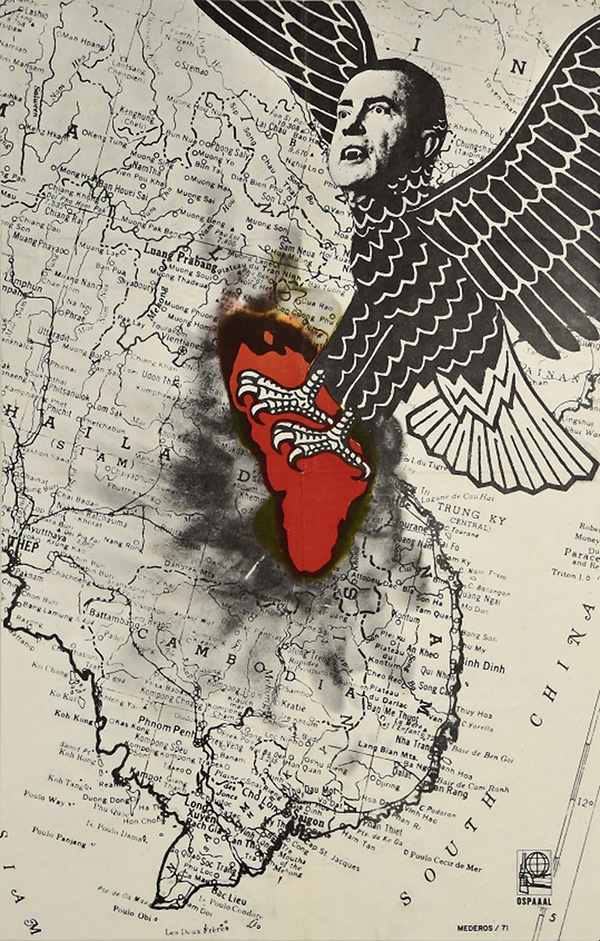 Nixon Tearing the Heart out of Indochina, 1971. Creator: René Mederos

“On January 3, 1966, 513 delegates representing 83 groups from countries across Latin America, Asia, and Africa gathered in Havana, Cuba for the first Tricontinental Conference. The meeting was organized by Moroccan politician Mehdi Ben Barka who was killed in 1965 before the conference took place. In attendance were two anti-imperialist and anti-capitalist groups, the Non-Aligned Movement—an organization of countries not associated with any power blocs—and the Afro-Asian People’s Solidarity Organization, which promoted unity between countries formally under imperialism. By the end of the conference the two had joined to form the Organization of Solidarity with the Peoples of Africa, Asia, and Latin America, more commonly known in Spanish as Organización de Solidaridad con los Pueblos de Asia, África y América Latina (OSPAAAL). While delegates from the United States were not welcome to attend the conference, some Americans journalists did. According to American intelligence gathered on the conference, Associated Press reporter Isaac M. Flores and the Jewish Daily Freiheit reporter Joseph North were among the seven American journalists invited as guests to the conference. In his memoir ‘Never Ending,’ Flores wrote that Cuba told foreign reporters that the country ‘sponsored the gathering as a way of demonstrating to imperialism that our country is not as isolated as they think.’ It is not clear how the United States gained intelligence on the conference, or if the American journalists had a role in aiding the intelligence officers. A report prepared for the Special Subcommittee to Investigate the Administration of the Internal Security Act and Other Internal Security Laws—also known as the United States Senate Subcommittee on Internal Security—labeled the Tricontinental Conference as ‘the most powerful gathering of pro-Communist, anti-American forces in the history of the Western Hemisphere.’ The event featured speeches by enemies of the United States during the Cold War, including delegates from the Soviet Union, who were invited to the conference by Cuba’s Prime Minister Fidel Castro himself. … After the conference, OSPAAAL launched a carefully crafted propaganda campaign that consisted of films, its Tricontinental magazine, and many well-known posters designed to spread the organization’s anti-capitalist and anti-American imperialism message around the world. (You can see a bunch of the posters on JSTOR in the Lindsay Webster Collection of Cuban Posters on JSTOR.) …”
JSTOR
JSTOR: The Lindsay Webster Collection of Cuban Posters