“The Rag was an underground newspaper published in Austin, Texas from 1966–1977. The weekly paper covered political and cultural topics that the conventional press ignored, such as the growing antiwar movement, the sexual revolution, gay liberation, and the drug culture. The Rag encouraged these political constituencies and countercultural communities to coalesce into a significant political force in Austin. As the sixth member of the Underground Press Syndicate and the first underground paper in the South, The Rag helped shape a flourishing national underground press. According to historian and publisher Paul Buhle, The Rag was ‘one of the first, the most long-lasting and most influential’ of the Sixties underground papers. In his 1972 book, The Paper Revolutionaries, Laurence Leamer called The Rag ‘one of the few legendary undergrounds.’ The Rag first hit the streets in Austin on October 10, 1966. Thorne Dreyer and Carol Neiman were the original editors of the paper. (They were called ‘funnels’ in keeping with the paper’s democratic structure.) The Rag was closely associated with SDS and played a major role in bringing together the anarchist-leaning New Lefties and Austin’s rich countercultural community, helping to merge them into a major political force. Former staffer Alice Embree recalls that ‘The Rag covered what was not covered by the straight press. The writers participated in the political and cultural uprising and also wrote about it. And they told you where to get a chicken dinner for 35 cents.’ The Rag featured the writing of major New Left figures like Gary Thiher, Jeff Shero, Robert Pardun, and Greg Calvert. It covered the Austin rock scene which was one of the birthplaces of the psychedelic music phenomenon. … The Rag featured news coverage and commentary on the War in Vietnam and the movement opposing it, the Civil Rights Movement, the student freedom movement, the development of the New Left and SDS, the psychedelic rock and folk music scenes, and the sixties counterculture movement, of which Austin was a major outpost. It also carried national and world news and opinion from Liberation News Service (LNS) and from other underground newspapers around the country. The Fabulous Furry Freak Brothers, Gilbert Shelton‘s iconic sixties comic strip, was born in The Rag and was republished in underground papers and comic books all over the world. …”
Wikipedia
The Rag: Austin Underground Press 1966-1977 (Video)
The Rag: Campus Underground
amazon: Celebrating The Rag: Austin’s Iconic Underground Newspaper 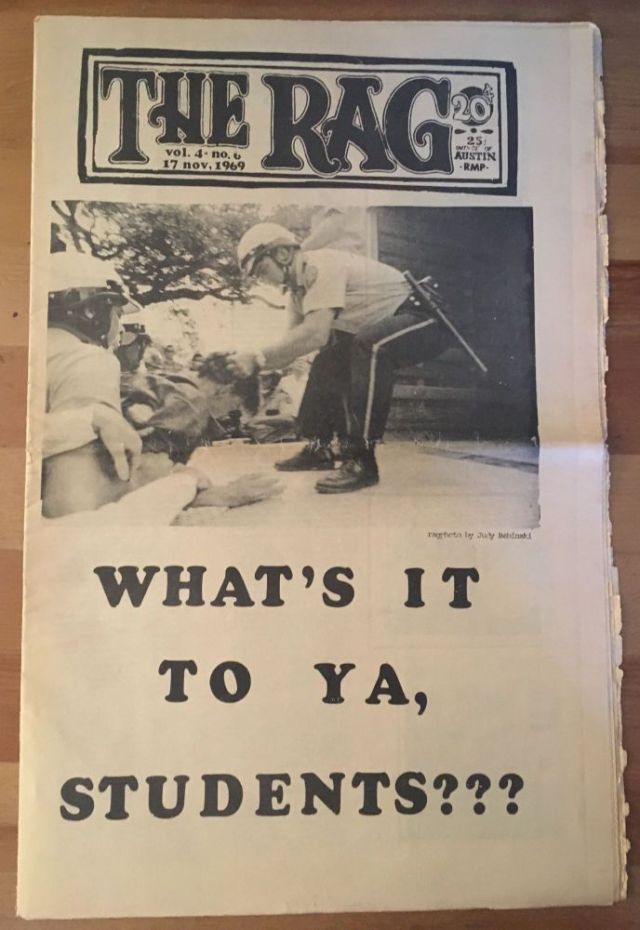