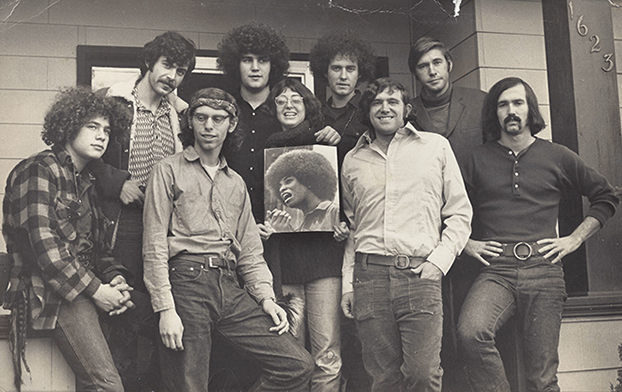 The Seattle Seven and two of their attorneys in summer 1970, photographer unknown

“The Seattle Liberation Front, or SLF, was a radical anti-Vietnam War movement, based in Seattle, Washington, in the United States. The group, founded by the University of Washington visiting philosophy professor and political activist Michael Lerner, carried out its protest activities from 1970 to 1971. The most famous members of the SLF were the ‘Seattle Seven,’ who were charged with ‘conspiracy to incite a riot‘ in the wake of a violent protest at a courthouse. The members of the Seattle Seven were Lerner, Michael Abeles, Jeff Dowd, Joe Kelly, Susan Stern, Roger Lippman and Charles Marshall III. After the nationwide organization Students for a Democratic Society (SDS) disintegrated in 1969, Michael Lerner, an instructor newly arrived in Seattle from Berkeley, California, felt compelled to start up his own local group. He kick-started his efforts by inviting Jerry Rubin, a notable counterculture figure, to speak on the University of Washington campus on January 17, 1970 – two days later, the SLF was formed, largely composed of students and radicals coming out of organizations (like the SDS) that had recently disbanded. The exact impetus for Lerner seeking a new organization is somewhat vague. The founding of SLF came less than a month after SDS Weatherman, which had staged violent street demonstrations during the latter half of 1969, announced that it was going underground to adopt a strategy of random acts of bombing, arson, and other sabotage. It has not been explained whether or not Lerner was seeking a new organization prior to Weatherman’s underground turn. One of the SLF’s first actions was to hold a demonstration in support of the Chicago Seven, a group of radicals charged with inciting riots at the 1968 Democratic National Convention. The relationship between the Weather Underground and the Seattle Liberation Front remains somewhat ambiguous. Both groups shared many of the same political viewpoints, where they participated in protests and demonstrations, and there was overlap in membership. The violent, confrontational style of protest at events sponsored by SLF was identical with that of the SDS Weatherman faction before the latter went underground at the end of 1969. There were no official ties between the Seattle Liberation Front and the Weather Underground. …”
Wikipedia
Seattle Times: The chaos, and surprising conclusion, of the 1970 trial of the Seattle 7
April 16, 1970: The Birth of the Seattle Seven
Radical Seattle Remembers – September 11, 1970: Sabot