“Film Comment is an arts and culture magazine now published by the Film Society of Lincoln Center, of which it is the official publication. Film Comment features reviews and analysis of mainstream, art-house, and avant-garde filmmaking from around the world.[1] Founded in 1962 and originally released as a quarterly, Film Comment began publishing on a bi-monthly basis with the Nov/Dec issue of 1972. … Film Comment was founded during the boom years of the international art-house circuit and the so-called New American Cinema, an umbrella term for the era’s independently produced documentaries and narrative features as well experimental and underground works. By way of a mission statement, founder publisher Joseph Blanco wrote in the inaugural issue: ‘With the increasing interest in the motion picture as an art form, and with the rise of the New American cinema, [Film Comment] takes its place as a publication for the independent film maker and those who share a sincere interest in the unlimited scope of the motion picture.’ Gordon Hitchens, 1962–1970. The magazine’s earliest publishers were Clara Hoover and Austin Lamont. By the third issue, the magazine had switched ownership to Lorien Productions, a corporation that Hoover ‘formed to cover investments in artistic enterprises’ (35, Feb 1984). Predisposition towards low-budget narrative features and cinéma vérité-style documentaries. Hitchens’ dual rejection of Hollywood and the avant-garde (despite being acquainted with Jonas Mekas and Gregory Markopoulos and involved in New York’s avant-garde scene). …”
Wikipedia
Film Comment
Film Comment – TCM Diary: Jane Fonda in the 1960s
Film Comment – Decade: 1960s 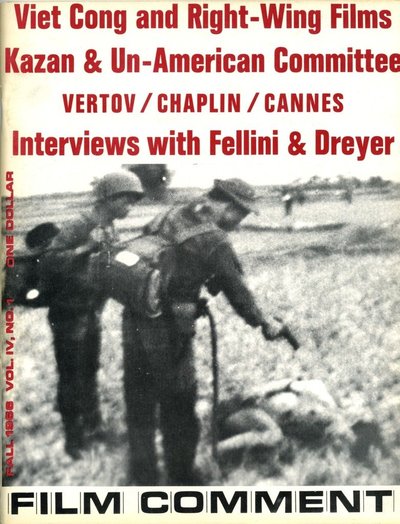