Echoes of 1969 – Harvard University and the Vietnam War 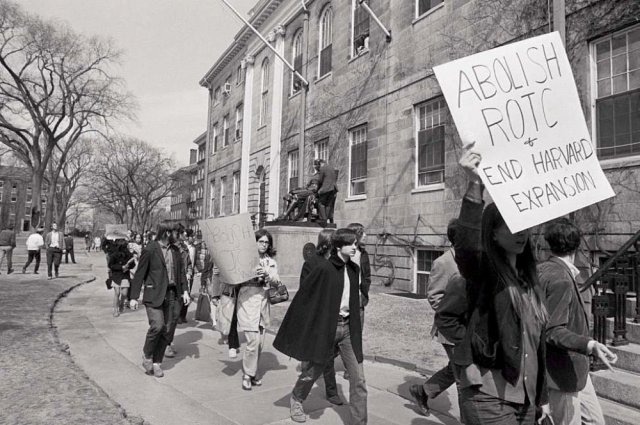 Shortly before noon on April 9, student demonstrators convened in front of Memorial Church before heading to University Hall to read their demands. …

“In the late 1960s, American society seemed in crisis. The Tet Offensive that began in January 1968 underscored the scale, violence, and increasingly apparent fecklessness of the war in Vietnam. The combat itself had opened ugly class divisions between those drafted into military service and the large cohort of Baby Boom students enrolled in college and, at least temporarily, exempt. In late March of that year, President Lyndon B. Johnson withdrew his candidacy for another term—and days later, Martin Luther King Jr. was assassinated, igniting a period of convulsive urban violence that laid bare severe racial divisions and deprivation, and prompting fears about wider disorder. Presidential candidate Robert F. Kennedy ’48 was murdered in early June. Like the war itself, home-front turbulence spilled into living rooms that summer as the brutal Democratic convention in Chicago was televised. In this context, campuses were drawn into the wider turmoil—notably, with the occupation of half a dozen buildings at Columbia that spring. Harvard seemed immune to those extremes—in part, some thought, because of the supposed cohesion created by its residential House communities. But campus controversies had already turned confrontational (the November 1966 demonstration against a visit by Secretary of Defense Robert McNamara; the October 1967 blockade of a recruiting visit by Dow Chemical Company, which supplied napalm to the military). And the same issues that agitated the wider society and fueled the national growth of Students for a Democratic Society (SDS) and similar groups—opposition to academic leaders’ engagement with military policy and institutional research seen as contributing to the war; the presence of ROTC programs on campus; University development in communities surrounding the Cambridge and Boston medical campuses; advocacy for a more racially diverse student body and curriculum—engaged and radicalized more members of the community. In December 1968, an SDS-led cohort tried to sit in on a faculty meeting focused on ROTC, forcing its postponement. The following February, although ROTC had been curtailed as an academic program with faculty appointments, the Harvard Corporation refused to terminate it completely….”
Harvard Magazine
W – Harvard University and the Vietnam War

State police gather in front of Widener Library near sunrise on April 10.