“In 1960 The Apartment was playing at Cinema Rialto and was advertised with a loud red poster. I was too young to see it at the time, but I do recall overhearing my parents describing it to their friends as an unusually bold film. What was shocking about the film was its subject. A young, rather hapless, timid junior executive named C. C. Baxter (played by Jack Lemmon) has been lending the key to his apartment to a number of married senior executives who need a place to spend a few leisurely evening hours with their mistresses. The key does the rounds of the office building, earns the young executive the goodwill of senior members, and eventually gets him promoted. In 1960 the subject was decidedly risqué. But something about the reaction of my parents intrigued me. They enjoyed talking about the film with their friends, about the acting, about the story itself, about this place called New York, which neither they nor their friends had ever seen before and which hovered in the distance like one of those places none of them was ever likely to set foot in. I never forgot my parents’ fascination with the kind of New York the film evoked, but since the film was not available on video or on late-night TV programs until the mid- to late seventies, I never gave it another thought. Yet when I finally did see it, where I saw it and who I myself was that evening left an indelible mark. The year was 1984—late fall of 1984. I was single at the time, living on New York’s Upper West Side, and was dropped by my girlfriend a couple of months earlier. I had no money, not much of a job, and as for career prospects, these were decidedly grim. So that Saturday, with nothing to do, no friends, nothing planned, and no desire to stay home, I went out for a walk down Broadway just to experience a Saturday evening lost in the crowd. At Eighty-First Street, I stepped into what was then the only Shakespeare and Company bookstore in Manhattan and was idly leafing through various books, envying couples who, like me, had also wandered into the store. Then I saw Maggie. I knew Maggie from a café where the two of us used to hang out almost every evening; neither of us was attached at the time, and neither liked being homebound on a weekend by ourselves. She was single and, like me, held a job that hardly paid anything. We were not attracted to each other, though something like a muted friendship had blossomed between us in our lonely-hearts café. …”
Criterion
W – The Apartment
amazon
YouTube: The Apartment (1960) 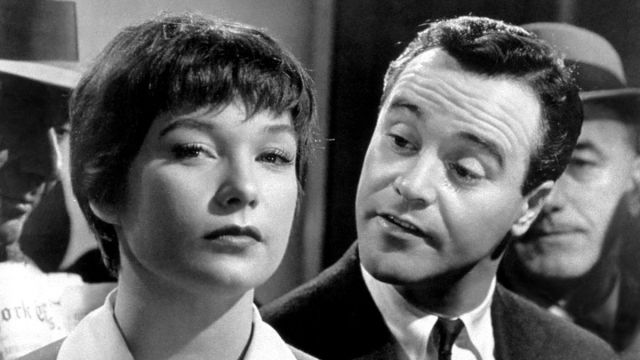