“The Realist was a pioneering magazine of ‘social-political-religious criticism and satire’, intended as a hybrid of a grown-ups version of Mad and Lyle Stuart‘s anti-censorship monthly The Independent. Edited and published by Paul Krassner, and often regarded as a milestone in the American underground or countercultural press of the mid-20th century, it was a nationally-distributed newsstand publication as early as 1958. Publication was discontinued in 2001. First published in the spring of 1958 in New York City in the offices of Mad, The Realist appeared on a fairly regular schedule during the 1960s and then on an irregular schedule after the early 1970s. In 1984, it was revived as a much smaller newsletter. Articles and cartoons from the magazine were collected in a book, The Best of the Realist (Running Press, 1984). The final issue of The Realist was #146 (Spring 2001). The Realist provided a format for extreme satire in its articles, cartoons and Krassner’s editorials, but it also carried more traditionally serious material in articles and interviews. The magazine also published political commentary from Norman Mailer, Ken Kesey and Joseph Heller. Hoaxes and advertising. Masquerade Party:  The first hoax directed toward mainstream culture involved the 1960 edition of the NBC show Masquerade Party. Typically, television network executives would react swiftly and fearfully to viewer complaints, no matter how small or unjustified the viewer response. Testing this premise, angry letters containing no specific complaints at all were sent in response to a particular episode of the innocuous game show. Bumper sticker: Among the more successful productions issued by Krassner was a red, white, and blue automobile bumper sticker, decorated with stars, which proclaimed ‘Fuck Communism‘. In advertising this item, Krassner advised that if anyone displaying the sticker received criticism, the critic should be told, ‘Go back to Russia, you Commie lover.’ Disneyland Memorial Orgy poster: His Disneyland Memorial Orgy poster, illustrated by Wally Wood and published in the May 1967 issue, was a highlight of the magazine, so successful that Krassner printed it as a poster that was widely pirated. The poster has been upgraded by Krassner into a new, digitally-colored version. …”
Wikipedia
Che’s Last Letters
The Realist
amazon: The Realist Cartoons 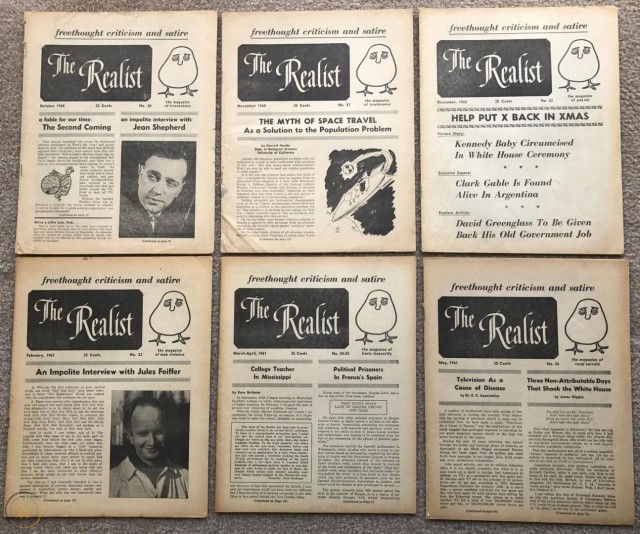