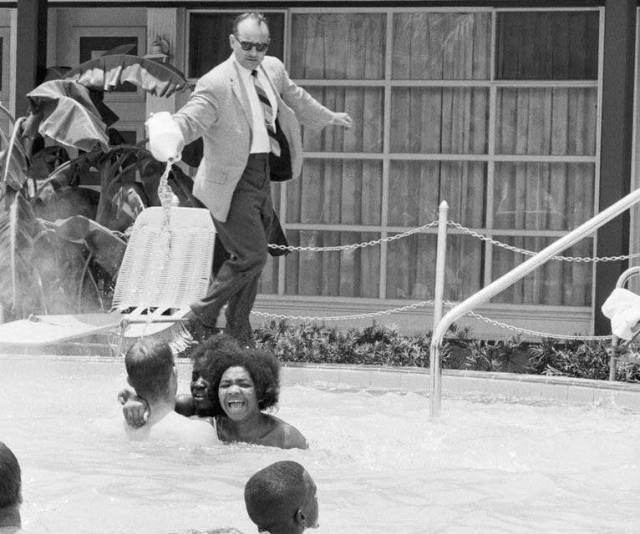 Protesters demonstrating in the swimming pool of the Monson Motor Lodge in St. Augustine, Fla., scream as motel manager James Brock dumps muriatic acid into the water on June 18, 1964.

“The 1964 Monson Motor Lodge protest was part of a series of events during the civil rights movement in the United States which occurred on June 18, 1964 at the Monson Motor Lodge in St. Augustine, Florida. The campaign in June – July 1964 was led by Robert Hayling, Martin Luther King Jr., Ralph Abernathy, Andrew Young, Hosea Williams, C. T. Vivian, Fred Shuttlesworth, among others. St. Augustine was chosen to be the next battleground against racial segregation on account of it being both highly racist yet also relying heavily on the northern tourism dollar. Furthermore, the city was due to celebrate its 400th anniversary the following year, which would heighten the campaign’s profile even more. Nightly marches were organized to the Slave Market, which were regularly attacked and the marchers were beaten. Meanwhile, the civil rights bill was being filibustered in the U.S. Senate. On June 10, the filibuster collapsed. The following day, King was arrested in St. Augustine. King had attempted to be served lunch at the Monson Motor Lodge, but the owner, James Brock—who was also the president of the St. Augustine Hotel, Motel, and Restaurant Owners Association—refused to serve him. King was arrested for trespass and jailed; while imprisoned, he wrote a letter to leading Jewish reformer, Rabbi Israel Dresner, urging him to recruit rabbis to come to St. Augustine and take part in the movement. This they did, and at another confrontation at the Monson, 17 rabbis were arrested on June 18. This was the largest mass arrest of rabbis in American history. At the same time, a group of black and white activists, protesters who had arrived from Albany, Georgia, JT Johnson, Brenda Darten, and Mamie Nell Ford, jumped into the Monson’s swimming pool. Brock—by now on edge from the constant picketing of his business—appeared to pour hydrochloric acid into the pool to burn the protesters. Photographs of this, and of a policeman jumping into the pool in everything but his shoes to arrest them, made headline news around the world. By now the Civil Rights Act had been passed, but St. Augustine businesses—particularly in the restaurant and culinary trades—were slow at desegregating. Eventually the courts forced Brock and his colleagues to integrate their businesses, and soon after he did, the Monson was firebombed by the Ku Klux Klan (KKK), who violently opposed desegregation. …”
Wikipedia
NY Times: 16 Rabbis Arrested as Pool Dive‐In Sets Off St. Augustine Rights Clash (June 19, 1964)
Who gets to hang out at the pool? (Audio)
YouTube: CAN 234 BLACK PEOPLE ARRESTED IN SWIMMING POOL DEMONSTRATION IN ST AUGUSTINE, FLORIDA

Motel and restaurant owner James Brock and his daughter, Robin, 13, raise a confederate flag in front of the Monson Motor Lodge in St. Augustine, Fla., June 19, 1964. The motel has been a target of integrationists for several weeks.