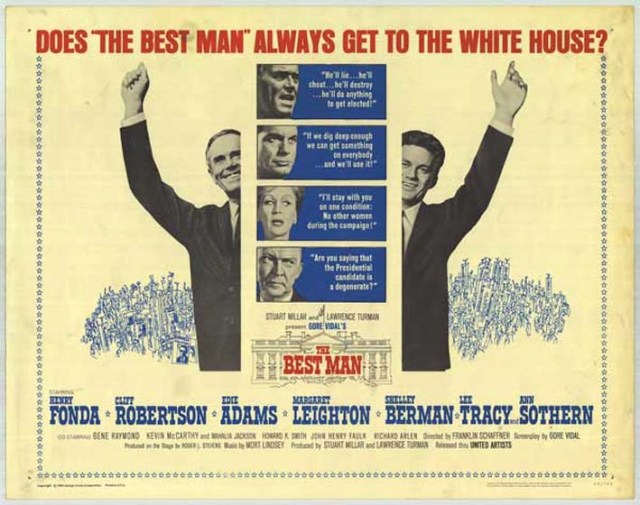 “The Best Man is a 1964 American political drama film directed by Franklin J. Schaffner with a screenplay by Gore Vidal based on his 1960 play of the same title. Starring Henry Fonda, Cliff Robertson, and Lee Tracy, the film details the seamy political maneuverings behind the nomination of a presidential candidate. The supporting cast features Edie Adams, Margaret Leighton, Ann Sothern, Shelley Berman, Gene Raymond, and Kevin McCarthy. Lee Tracy was nominated for an Academy Award for Best Supporting Actor for his performance, and it was his final film. In May 1964, former Secretary of State William Russell (Henry Fonda) and Senator Joe Cantwell (Cliff Robertson) are the two leading candidates for the presidential nomination of an unspecified political party. Both have potentially fatal vulnerabilities. Russell is a principled intellectual (said by Vidal to be based on Adlai Stevenson). His sexual indiscretions and lack of attention to his wife Alice (Margaret Leighton) have alienated her. In addition, he has a past nervous breakdown to live down. Cantwell (whom Vidal wrote was based on Richard Nixon) portrays himself as a populist ‘man of the people’ and patriotic anti-communist campaigning to end ‘the missile gap’ (a Kennedy campaign catch-phrase). He is a ruthless opportunist, willing to go to any lengths to get the nomination. Neither man can stand the other; neither believes his rival qualified to be president. At the nominating convention in Los Angeles, they lobby for the crucial support of dying former President Art Hockstader (Tracy). The pragmatic Hockstader (a character based on Harry S. Truman, particularly his comments on ‘striking a blow for liberty’ whenever he drinks a bourbon) prefers Russell, but worries about his indecision and principles; he despises Cantwell for his lack of intellect, but appreciates his toughness and willingness to do whatever it takes. Hockstader decides to support Cantwell, but the candidate blunders badly. When the two speak privately, Cantwell attacks Russell using illegally obtained psychological reports obtained by Don Cantwell, his brother and campaign manager (clearly based on Bobby Kennedy, who was known as ‘Ruthless Robert’ in political circles during the 1950s and early 1960s. Cantwell mistakenly assumed that Hockstader was going to endorse Russell. The former president tells Cantwell that he does not mind a ‘bastard,’ but objects to a stupid one. He endorses neither man. …”
Wikipedia
The Ten Percent: The Best Man (Video)
Criterion: The Best Man (1964)
YouTube: The Best Man – Available now 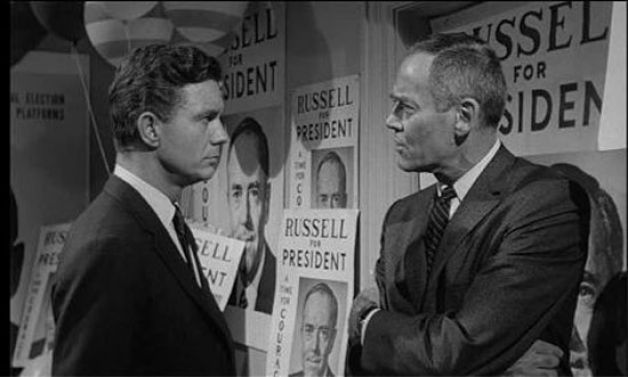