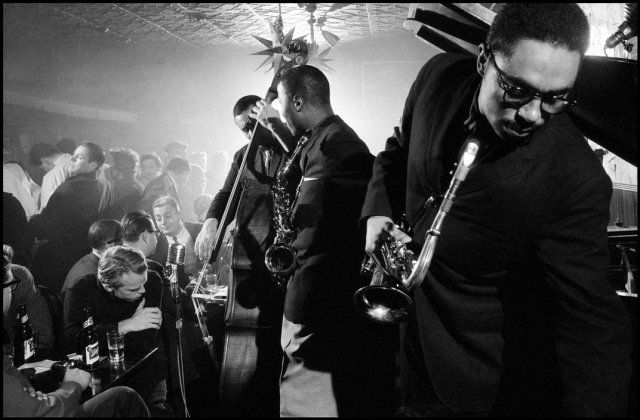 “The Five Spot Café was a jazz club located at 5 Cooper Square (1956–1962) in the Bowery neighborhood of New York City, between the East and West Village. In 1962, it moved to 2 St. Marks Place, until closing in 1967. Its friendly, non-commercial, low-key atmosphere, with affordable drinks and food, and cutting edge bebop and progressive jazz attracted a host of avant-garde artists and writers. It was a venue of historic significance as well, a Mecca for musicians, both local and out-of-state, who packed the small venue to listen to many of the most creative composers and performers of the era. … Many musicians lived nearby and frequented the sessions, including Elvin Jones and Blossom Dearie. Some, like Lester Young, hung out, while others, such as Cannonball Adderley, sat in. It shared many patrons with the nearby Cedar Tavern; artists including David Smith, Willem de Kooning, Franz Kline, Joan Mitchell, Alfred Leslie, Larry Rivers, Grace Hartigan, Jack Tworkov, Michael Goldberg, Roy Newell, and Howard Kanovitz, as well as writers and poets Jack Kerouac, Allen Ginsberg, Frank O’Hara, Ted Joans, and Gregory Corso who began to frequent the club. The Baroness Nica de Koenigswarter was a regular. Even Paul Newman came to get a better understanding of the ‘scene.’ The first official engagement at the Five Spot was Cecil Taylor, whose band featured Buell Neidlinger on bass and Dennis Charles on drums. … On 18 July 1957, Thelonious Monk‘s quartet began a six-month residency at the club. The group featured John Coltrane on tenor saxophone, Wilbur Ware on bass, and Shadow Wilson on drums. It was Monk’s first engagement in New York City following a long suspension of his cabaret card, a problem which was resolved with assistance from the Terminis. Monk had another extended booking at the club a year later, this time with Coltrane replaced by Johnny Griffin, Ware by Ahmed Abdul-Malik, and Wilson by Roy Haynes. That group was recorded and issued on the albums Thelonious in Action and Misterioso, (both 1958). On 17 November 1959, the Ornette Coleman Quartet from Los Angeles made its New York debut at the Five Spot. The Quartet featured Coleman on alto saxophone, Don Cherry on cornet, Charlie Haden on bass, and Billy Higgins on drums. …”
Wikipedia
‘Definitely a New York Hang’: Jazz Musicians Remember the Five Spot Café
Discogs – Five Spot Café
YouTube: Live At The Five Spot Café ’58 – Thelonious Monk, John Coltrane 1 / 7, Eric Dolphy – At The Five Spot, Vol. 1 (1961) (Full Album), At The Five Spot, Vol. 2, Kenny Burrell on view At The 5 Spot Cafe 1/8