After the Fall – Arthur Miller, Directed by Elia Kazan (1964)

“After the Fall is a play by the American dramatist Arthur Miller. The play premiered on Broadway at the ANTA Washington Square Theatre on January 23, 1964, and closed on May 29, 1964 after 208 performances. Directed by Elia Kazan, who collaborated with Miller on the script, the cast starred Barbara Loden as Maggie and Jason Robards Jr. as Quentin, along with Ralph Meeker as Mickey, Salome Jens as Holga, and an early appearance by Faye Dunaway as Nurse. Barbara Loden, Kazan’s wife, won the 1964 Tony Award for Best Featured Actress in a Play, and Jason Robards was nominated for the 1964 Tony Award for Best Actor in a Play. After the Fall, one of Miller’s more personal plays, is a thinly veiled personal critique centered on Miller’s recent divorce from Marilyn Monroe: the plot takes place inside the mind of Quentin, a New York City Jewish intellectual who decides to reexamine his life in order to determine whether or not he should marry his most recent love, Holga. The play has been roundly criticised for being too similar to Miller’s actual life because Maggie’s suicide is very similar to that of Miller’s former wife, Monroe. In fact, the feelings of the protagonist, Quentin, are often believed to be Miller’s own reflections about his failed marriage. For example, according to Sarah Bradford, in her biography America’s Queen: The Life of Jacqueline Kennedy Onassis, ‘Jackie, who had admired Arthur Miller enough to seat him at her table at the Malraux dinner, turned on him for his betrayal of Marilyn in his play After the Fall, which opened in New York on January 23, 1964. For [Jackie Kennedy] loyalty was the ultimate test of character, and in portraying Marilyn as a self-destructive slut whom he had abandoned for her own good, Miller had dismally failed it.’  Although After the Fall remains very unpopular with critics, it is revered in the academic arena as a deep and intellectual play, albeit difficult to follow because it does not follow the conventional sequence of events found in typical works. The play remains one of Miller’s less popular works, attributed in part to the non-linear, often surrealistic nature of the plot and setting; all but the initial and final seconds of the play take place in the protagonist’s brain, which is reflected by a set comprising a single chair before a concentration camp guard tower, which is surrounded by a giant, winding ramp made up of crevices, pits, and abutments. …”
Wikipedia
News Statesman: Arthur Miller’s anatomy of a nation
NY Times: Freeing ‘After the Fall’ From the Ghost of Marilyn
amazon 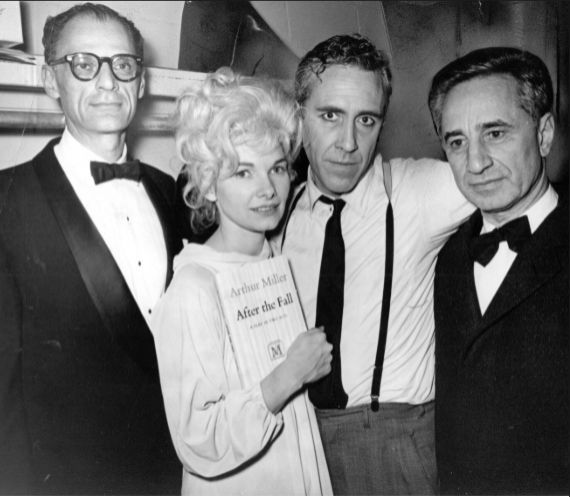