Allen Ginsberg at the End of America 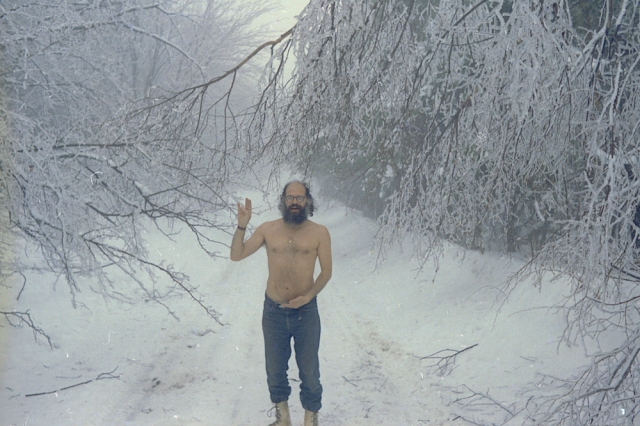 “In 1965, Bob Dylan gifted Allen Ginsberg with a Uher reel-to-reel tape recorder, which Ginsberg was to use to record his thoughts and observations as he traveled throughout the United States. Ginsberg, already heavily influenced by Jack Kerouac’s methods of spontaneous composition, felt the taping was an ideal way to pursue his own spontaneous work. He began planning a volume of poems, a literary documentary examining contemporary America, not unlike what Kerouac had done in On the Road, or what Robert Frank had accomplished in his photographs in The Americans. He would add one important element: the violence, destruction, and inhumanity of the escalating war in Vietnam—an edgy contrast to what he was witnessing in his travels, particularly his country’s natural beauty. The public’s polarized dialogue over Vietnam—and, earlier in the decade, the civil rights movement—convinced Ginsberg that America was teetering on the precipice of a fall. He initiated what he called his ‘auto poesy’ recordings that fall, when he and Gary Snyder roamed the Pacific Northwest and the mountain trails there. Ginsberg used recently awarded Guggenheim money to purchase a Volkswagen camper, which he stocked with a desk, a small refrigerator, mattresses, and other items needed for life on the road. The visits to Oregon and Washington presented a good setting for Ginsberg’s observations. ‘Beginning of a Long Poem of These States,’ the official opening of The Fall of America’s auto poesy, offers a sampling of Ginsberg’s most affective writing to that point: descriptive poetry in the objective tradition of William Carlos Williams, one of Ginsberg’s early mentors and influences; spontaneous writing similar to that of Jack Kerouac; and lengthy lines in the style of Walt Whitman (and like that in such early Ginsberg works as ‘Howl,’ ‘Sunflower Sutra,’ and ‘Kaddish’). In most cases, Ginsberg transcribed his tapes, shortly after composition, into his notebooks. While doing so, he eliminated extraneous sounds on the tapes (conversations in the vehicle, the sounds of the radio, and so on) and he engaged in light editing. In the transcriptions, he broke down his taped speech into the form he wanted his individual poems to take. …”
The Paris Review
W – The Fall of America: Poems of These States
Dancing to the Music of Time On Allen Ginsberg’s Birthday
amazon