“A frisbee (pronounced FRIZ-bee, origin of the term dates to 1957, also called a flying disc or simply a disc) is a gliding toy or sporting item that is generally made of injection molded plastic and roughly 8 to 10 inches (20 to 25 cm) in diameter with a pronounced lip. It is used recreationally and competitively for throwing and catching, as in flying disc games. The shape of the disc is an airfoil in cross-section which allows it to fly by generating lift as it moves through the air. Spinning the disc imparts a stabilizing gyroscopic force, allowing it to be both aimed with accuracy and thrown for distance. A wide range is available of flying disc variants. Those for disc golf are usually smaller but denser and tailored for particular flight profiles to increase or decrease stability and distance. The longest recorded disc throw is by David Wiggins Jr. with a distance of 1,109 feet (338 m). Disc dog sports use relatively slow-flying discs made of more pliable material to better resist a dog’s bite and prevent injury to the dog. Flying rings are also available which typically travel significantly farther than any traditional flying disc. Illuminated discs are made of phosphorescent plastic or contain chemiluminescent fluid or battery-powered LEDs for play after dark. Others whistle when they reach a certain velocity in flight. The term frisbee is often used generically to describe all flying discs, but Frisbee is a registered trademark of the Wham-O toy company. This protection results in organized sports such as Ultimate or disc golf having to forgo use of the word ‘Frisbee’. Walter Frederick Morrison and his future wife Lucile had fun tossing a popcorn can lid after a Thanksgiving Day dinner in 1937. … In June 1957, Wham-O co-founders Richard Knerr and Arthur ‘Spud’ Melin gave the disc the brand name ‘Frisbee’ after learning that college students were calling the Pluto Platter by that term, which was derived from the Connecticut-based pie manufacturer Frisbie Pie Company, a supplier of pies to Yale University, where students had started a campus craze tossing empty pie tins stamped with the company’s logo—the way that Morrison and his wife had in 1937. …”
Wikipedia
How to Throw a Frisbee Forehand (Video)
amazon: Discraft 175 gram Ultra Star Sport Disc
YouTube: How to Throw a Frisbee for Beginners, Ultimate Frisbee Tutorial – Top 3 Throwing Techniques 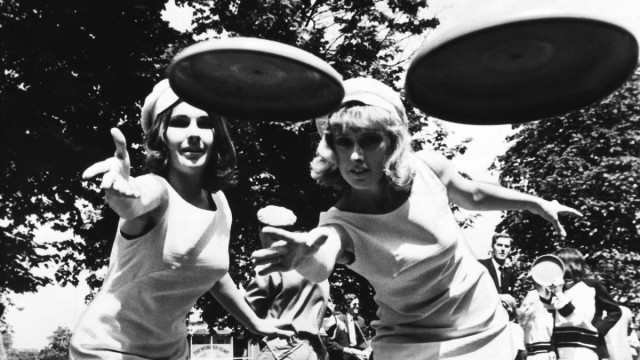