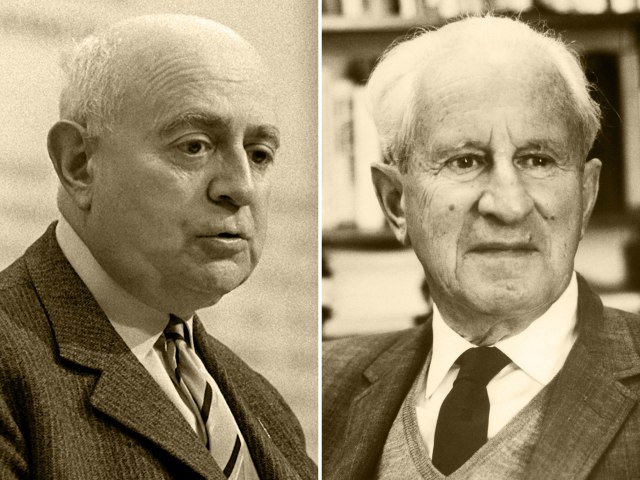 “I still believe that our cause (which is not only ours) is better taken up by the rebellious students than by the police, and, here in California, that is demonstrated to me almost daily,” wrote Herbert Marcuse (right) to his colleague Theodor Adorno (left).

“In a series of letters sent between Frankfurt and San Diego during the tumult of the late 1960s, German intellectuals Theodor Adorno and Herbert Marcuse debated protest tactics, ‘left fascism,’ and the use of force to maintain social order. A half century later, their arguments still resonate amid the unrest sweeping the United States. The social and political unrest of the late 1960s, particularly the progressive activism of student movements, was a worldwide phenomenon. In April 1968, hundreds of Columbia University students occupied campus buildings to protest the construction of a segregated gym in Harlem, among other grievances. Then in May, thousands of anticapitalist French students took to the streets after demands for reforms to the Sorbonne’s outmoded social and academic policies were met with police violence, their action culminating in a general strike that included about a fifth of the country and paralyzed the national economy. That same month, in Germany, the radical Socialist German Student Union (Sozialistischer Deutscher Studentenbund, or SDS), which had been accused a year earlier of ‘left fascism’ by the philosopher Jürgen Habermas, occupied Goethe University in Frankfurt—a sign above the school’s main entrance proclaimed it ‘KARL MARX UNIVERSITÄT.’ On Bloody Thursday in May 1969, police fired tear gas and bullets at protesters opposing UC Berkeley’s attempted seizure of what is now People’s Park, killing one person and injuring hundreds. The roles and purposes of ostensibly democratic social institutions, and with them the legitimacy of the use of force to resist or protect those institutions, were called into question. … Often a hotbed of radical politics, California was at the center of Adorno and Marcuse’s correspondence. As an emerging generation turned its attention to the repressive, violent, and regressive tendencies of the culture it stood to inherit, the question became how—not whether—to act. …”
Alta
W – Theodor W. Adorno, W – Herbert Marcuse