Etta James – Tell Mama, Tyrone Davis – If I Could Turn Back The Hands Of Time, Joe Simon – The Chokin’ Kind, This Old Heart Of Mine – The Isley Brothers, etc. 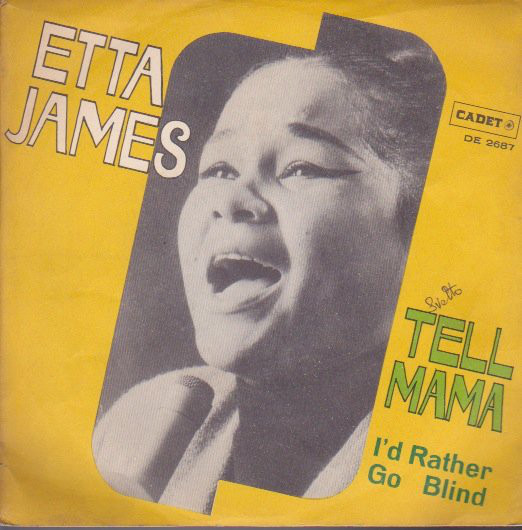 “‘Tell Mama’ is a song written by Clarence Carter, Marcus Daniel and Wilbur Terrell (though some recordings give the sole songwriting credit to Carter). It is best known in its 1967 recording by Etta James. … His recording, released on the Fame label, became Carter’s first chart hit, reaching no.35 on the Billboard R&B chart in early 1967. Etta James was persuaded by Chess Records‘ executive Leonard Chess to record her second album for his company (on the Cadet label) at the FAME Studios in Muscle Shoals, Alabama: impressed by the studio’s pedigree – FAME having generated a recent string of hits by the likes of Aretha Franklin, Wilson Pickett and Percy Sledge – Chess was also motivated to send James to rural Alabama so as to remove her from the urban environment which had recently fostered the singer’s substance abuse issues to the point of hospitalization and incarceration. … With the original version of ‘I’d Rather Go Blind‘ as B-side, ‘Tell Mama’ was released on the Cadet label in October 1967 as its parent album’s advance single. Debuting on the R&B chart in November 1967 ‘Tell Mama’ would peak there at no.10 , while the track would afford James her all-time highest Pop ranking with a Billboard Hot 100 peak of no.23. …”
W – Tell Mama, YouTube: Etta James – Tell Mama
W – Turn Back the Hands of Time, YouTube: Tyrone Davis – If I Could Turn Back The Hands Of Time
W – The Chokin’ Kind, YouTube: Joe Simon – The Chokin’ Kind
W – This Old Heart of Mine (Is Weak for You), YouTube: This Old Heart Of Mine (Is Weak For You) · The Isley Brothers
W – Walking the Dog, YouTube: Rufus Thomas – Walking the Dog
W – 634-5789 (Soulsville, U.S.A.), YouTube: Wilson Pickett – 634-5789
W – You Beat Me to the Punch, YouTube: Mary Wells – You Beat Me To The Punch
W – Whatcha See Is Whatcha Get, YouTube: Whatcha See is Whatcha Get – The Dramatics
W – Just One Look, YouTube: Doris Troy – Just One Look
W – “Hi-Heel Sneakers”, YouTube: Tommy Tucker – Hi-Heel Sneakers