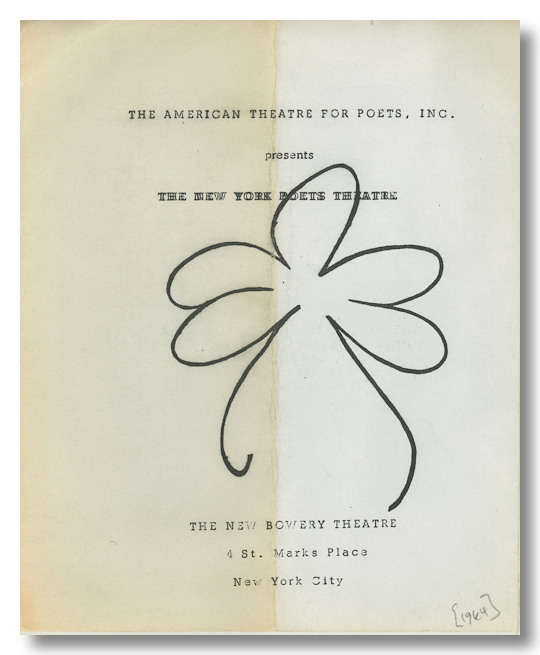 “The East End Theatre was an Off-Off-Broadway theater venue located at 85 East 4th Street. Existing in the 1960s, the theater was the creation and home from January 1, 1965 to December 31, 1965 of the New York Poets Theatre, an experimental theater project founded by artists James Waring, LeRoi Jones (later Amiri Baraka), Alan Marlowe, Fred Herko and Diane di Prima. Being the last, and arguably the most serious, of the theatres of the New York Poets Theatre group, Marlowe, who spearheaded this property, converted what was once a basic dance hall into ‘A jewelbox of a theatre…like the best art theatres of Europe’ as remarked by Frank O’Hara, according to Diane di Prima’s memoir Recollections of My Life as A Woman: The New York Years. In the memoir she recalls how Marlowe spent a great deal of money decorating the space by ‘buying used theatre seats, real red velvet theatre curtains, redesigning the stage, and covering the stage floor with hardwood.’ Even the stage floor had cork installed underneath to provide cushioning for the dancers, something the late dancer and co-founder Fred Herko always wanted. By any standards, the East End Theatre was a special kind of theatrical project fit to be a lasting tribute as the final venue of the culturally influential New York Poets Theatre group. The building itself (built around 1834) had many previous lives before it became the East End Theatre in 1965, according to the New York Landmarks Preservation Committee.  … It was at this time that Alan Marlowe of the New York Poets Theatre rented the hall from the Ukrainian’s for a one-year lease so that the theater group could have a permanent venue to perform their original one-person plays. By January 1, 1965, the building was renamed the East End Theatre. After the year stint as a playhouse, the building went back to being a community hall for the Ukrainians and finally the headquarters for the National Council of American-Soviet Friendship. …”
Literary Manhattan
W – New York Poets Theatre
Andy Warhol, Diane di Prima, Freddy Herko, The New York Poets Theatre and the Judson Dance Theatre