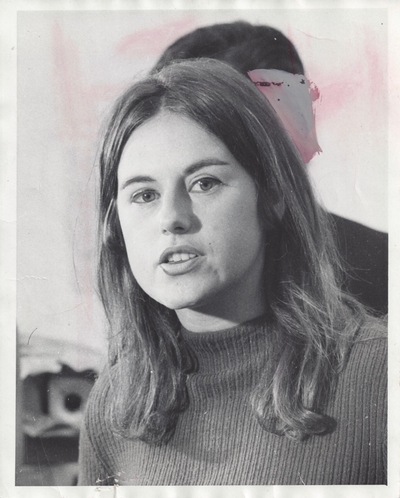 “Initially called ‘The Proud Eagle Tribe,’ the communiqué from the Women’s Brigade of the Weather Underground pledged to ‘build a militant women’s movement that commits itself to the destruction of Amerikan imperialism’ and exploit ‘the man’s chauvinism’ as a ‘strategic weakness.’ The Women’s Brigade was made up of seventy members, led by Bernardine Dohrn. Their activities, although sensationalized for publicity purposes, were primarily confined to the levels of sympathizers and spies. The internal policies of WUO strictly defined as well as limited women’s contributions within the group. The WUO required members to live in ‘weather collectives’ in an effort to reject the bourgeois society. All female members were required to have sex with all male members, and women also had sexual relations with other women, as monogamous relationships were considered ‘counterrevolutionary.’ Revolution was considered to be the top priority, therefore, new mothers were required to give their babies to lower-ranking members if they appeared to be overly distracted from their political goals. October 14, 1970 – The Women’s Brigade bomb the Center for International Affairs at Harvard University and is conducted in solidarity with Angela Davis, a political activist who had recently been arrested. The bombing is considered to be the first action taken by the Brigade. The women choose an institution tied to the Vietnam War as their target in order to contest the current notion among some feminists that Vietnam was not a women’s issue. July 24, 1973 – A Collective Letter to the Women’s Movement is released by the Brigade as an attempt to engage the women’s movement in debate around feminist politics and how it relates to other struggles. It is also meant to denounce Jane Alpert who was temporarily provided sanctuary by Weather cells whiles she was underground as a result of non-Weather-related bombings in New York. … March 6, 1974 – The Women’s Brigade bomb the San Francisco Department of Health, Education, and Welfare (HEW) offices. WUO states that this is in honor of International Women’s Day (March 8) and in remembrance of Weatherman members Diana Oughton, Ted Gold and Terry Robbins. The Brigade argues in its communiqué for women to take control of daycare, health care, birth control and other aspects of women’s daily lives. …”
Wikipedia
W – Bernardine Dohrn, W – Jane Alpert, W – Diana Oughton
The Radical Feminist Movement
The Story of Diana: The Making of a Terrorist
Washington Post – Cathy Wilkerson: The Evolution of a Revolutionary
[PDF] Moving Mountains?: Bernardine Dohrn and the Women of the Weather Underground