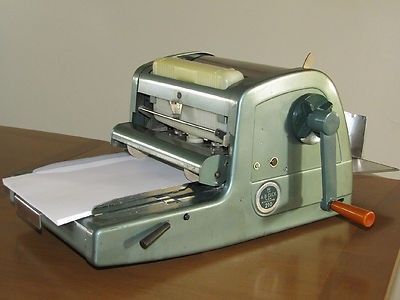 “If the letterpress represents the magazine or book as high art, the mimeograph machine epitomizes lo-fi production. The master of the mimeograph machine must first of all be a master of the stencil. The stencil is a floppy wax sheet backed by carbon paper and a stiff card, bound together at the top. Text and illustrations were either typed into the stencil with a typewriter or cut with a stylus. In Recollections of My Life as a Woman, Diane Di Prima remembered the frustrations of the stenciling process. … Floating Bear embodied this element to the fullest. In terms of format, the Bear was no frills. The layout is simple. It is all typewritten text with no illustrations. It looks like a community newsletter than you see for a present day condo complex, except Floating Bear‘s community was the literary circles of New York and California in the 1960s. What counted was the material in the magazine and in some cases it was fine indeed. (See my old website for a description of Burroughs’ role in Floating Bear.) Several writers expressed their gratitude for having this ear to the ground outlet, especially Charles Olson. Poets in the heat of battle could get feedback immediately. Poets at Le Metro took this sense of immediacy to an extreme. At the Les Deux Magots and Café Le Metro, Dan Saxon collected the manuscripts of poems read on the premises on a certain night. Handwritten or typed copies of just performed work were quickly mimeoed. In some cases, poems were stenciled on the spot. The results were distributed to an audience of writers who commented on and incorporated the contents into their own work. Like Floating Bear, the layout and presentation of the poems was simple and direct. Yet some pages read like holograph sheets straight from the poet’s notebook. To own a copy of Le Metro now, it feels like owning the manuscript to a live performance. The cigarette smoke rises from the coffee stained pages. … I feel that the mimeos preserved a fleeting community as well as a poetry that was produced with passion but not with a care for posterity. The poetic practices of Bob Kaufman (Beatitude Magazine) or Frank O’Hara (countless New York mimeos) cared little for cataloging or preserving the work. For example, many of Kaufman’s poems would never have been saved if his wife did not write them down. …”
RealityStudio
RealityStudio: The Great Mimeograph Revolution
Poems in Street, Coffeehouse, and Print—The Mid-1960s
W – Mimeo Revolution