May 16, 1970 – Jackson, Mississippi: Unidentified man stands behind shattered window of women’s dormitory following the fatal shooting of two Negro students at Jackson State College. Fifteen others were hurt in a shootout between police and alleged snipers.

“The Jackson State killings occurred on Friday, May 15, 1970, at Jackson State College (now Jackson State University) in Jackson, Mississippi. On May 14, 1970, city and state police confronted a group of students. Shortly after midnight, the police opened fire, killing two students and injuring twelve. The event happened only 11 days after the Kent State shootings, in which National Guardsmen killed four students at Kent State University in Ohio, which had first captured national attention. A group of around 100 black students had gathered on Lynch Street (named after black Reconstruction Era congressman John R. Lynch), which bisected the campus, on the evening of Thursday, May 14. The group ‘were reportedly pelting rocks at white motorists driving down the main road through campus — frequently the site of confrontations between white and black Jackson residents.’ By 9:30 p.m. the students had started fires, thrown rocks at motorists, and overturned vehicles including a large truck, after a false rumor spread of the death of Charles Evers. Firefighters dispatched to the scene quickly requested police support. The police responded in force. At least 75 Jackson police units from the city of Jackson and the Mississippi Highway Patrol attempted to control the crowd while the firemen extinguished the fires. After the firefighters had left the scene shortly before midnight, the police moved to disperse the crowd that had gathered in front of Alexander Hall, a women’s dormitory. Advancing to within 50 to 100 feet (15 to 30 m) of the crowd, at roughly 12:05 a.m., officers opened fire on the dormitory. The exact cause of the shooting and the moments leading up to it are unclear. Authorities say they saw a sniper on one of the building’s upper floors and were being sniped in all directions. Later two city policemen and one state patrolman reported minor injuries from flying glass, and an FBI search for evidence of sniper fire was negative. … The crowd scattered and a number of people were trampled or cut by falling glass. Phillip Lafayette Gibbs, 21, a junior, and James Earl Green, 17, a senior and miler at nearby Jim Hill High School, were killed; twelve others were wounded. Gibbs was killed near Alexander Hall by buckshot, while Green was killed behind the police line in front of B. F. Roberts Hall, also with a shotgun. …”
Wikipedia
The Nation: Remembering the Jackson State Tragedy
NY Times: 50 Years Ago, Police Fired on Students at a Historically Black College
YouTube: Jackson State killings 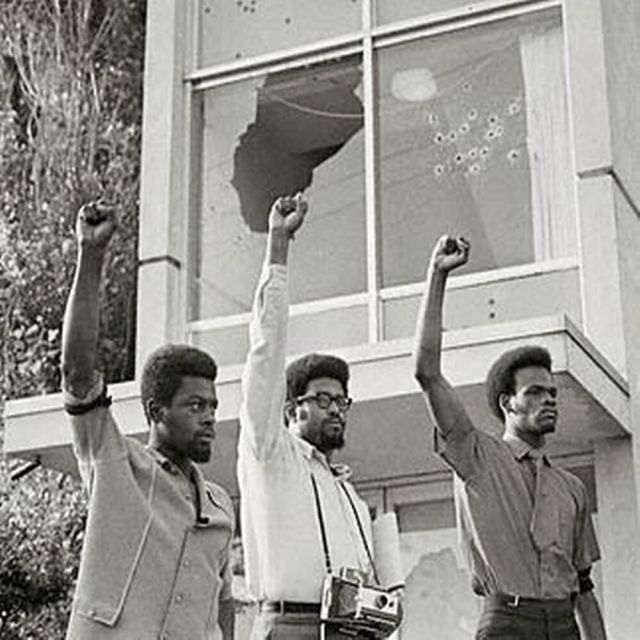