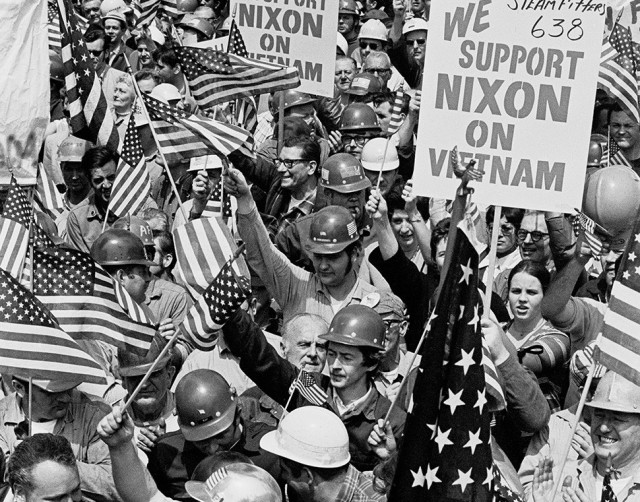 “This was something genuinely new, and raw. Even jaded viewers tuning in to the network news on May 8, 1970, must have been shocked to see helmeted construction workers waving enormous American flags and chanting “All the way, U.S.A.” as they tore through an antiwar demonstration in Manhattan’s financial district — all of it just days after four students had been shot dead by National Guardsmen during a peaceful protest at Kent State University in Ohio. Pummeling anyone in their way, the workers kicked and beat demonstrators, battering them with their hard hats. News cameras shakily recorded the workers as they stormed the steps of Federal Hall on Wall Street. One of the workers, upon reaching the top, delivered a vicious right hook to a demonstrator, dropping him to his knees, just below the statue of George Washington. As they jubilantly raised their flags over the crowd and burst into a chorus of ‘God Bless America,’ the mass of workers seemed, from a distance, to have restaged the raising of the flag over Iwo Jima. ‘It damn near put a lump in your throat,’ said Joe Kelly, an elevator builder who was working on the World Trade Center. Cliff Sloane, a student interviewed later that month by The New York Times, felt differently. ‘If this is what the class struggle is all about,’ he said, ‘there’s something wrong somewhere.’ Today, the chaotic scene looks like a harbinger of current divisions, which have only become deeper with the recent public health crisis and economic tailspin. Back then, it looked like proof of something John Lindsay, New York’s mayor, had said earlier that week: ‘The country is virtually on the edge of a spiritual — and perhaps even a physical — breakdown.’ Lindsay’s remark came two days after the Kent State shootings, six days after President Richard M. Nixon’s announcement of the invasion of Cambodia and five years after the deployment of U.S. combat troops to Vietnam, where some 50,000 Americans had already been killed, with no end in sight. At home, there were racial uprisings in cities like Newark and Detroit, students occupied universities, women protested the Miss America pageant, and gay people fought with police at the Stonewall Inn. …”
NY Times
W – Hard Hat Riot
Voice: Working Class on Wall St.: Requiem for the Payday Patriots (May 21, 1970)
Jacobin: The Myth of the Hardhat Hawk
amazon: The Hardhat Riot: Nixon, New York City, and the Dawn of the White Working-Class Revolution
YouTube: RICHARD NIXON TAPES: Welfare loafers, Hard hats, & Democrats (1). April 21, 1971, White House Telephone. 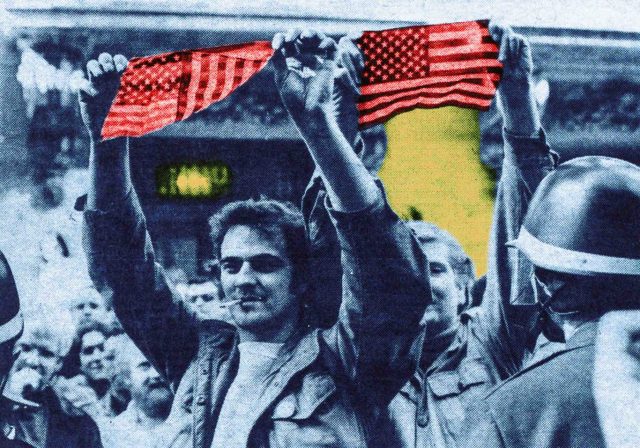