Leroy won a George Polk Award in 1967 for her photographs of Vietnam.

“In 1971, during the rainy season, I was sitting in a room in an old-fashioned French hotel in Saigon, Republic of Vietnam. It was evening and darkness was settling with the suddenness of dimmed stage lighting over the noise and reek of the city. Beyond the groans of my ancient air-conditioner, there sounded the thunder that might always be, but rarely was, something else. The thunder persisted as the scattery silence of curfew came down. That afternoon Judy Coburn, The Nation’s correspondent in Saigon, had given me a copy of the New American Review that contained a section of reportage by Michael Herr, who had come to Vietnam on assignment for Esquire. New American Review was a literary magazine in paperback-book form that favored the latest work of younger writers, and the passages of Herr’s work were entitled ‘Illumination Rounds.’ The title itself seized the mind’s eye in a moment, moved a reader into a dark space inside himself where remembered parachute flares spread their whiter-than-white slow descending light and the red or green tracer rounds could suggest a celebration. The six syllables of Herr’s title evoked a nocturne at once explosive and uncannily calm, hypnotic in its prodigal light and color. In the finished book, published in 1977 under the title Dispatches, Herr writes about some of the effects in question. … Herr’s narrative in Dispatches is an unrelenting tale like the Ancient Mariner’s. He speaks with the Mariner’s stricken urgency and, like that figure, once he engages our attention he holds us fast so that we cannot choose but to hear. It is as though the writer moves like a magician over the unlucky country of Vietnam and in one blinding shell-burst after another reveals some new field of sorrow, disfigurement, or death. The scenes illuminated are often so gripping, and so precise in their rendering of humanity ensnared in the large and small hooks of war that they remain unforgettable. ‘There it is,’ they used to say in Vietnam, a despairing catchphrase to signify the presence of some ineluctable force at the core of the situation. The force would appear suddenly out of whirl as if to explain everything, shimmer for an instant and be gone, a malign antic spirit. It never stayed in view long enough to disclose useful intelligence but people came to recognize it. …”
LitHub
The Paris Review: Michael Herr, 1940–2016
NY Times: The Greatest War Photographer You’ve Never Heard Of
YouTube: Dispatches (1977) by Michael Herr (Unabridged Audiobook) 8:30:17 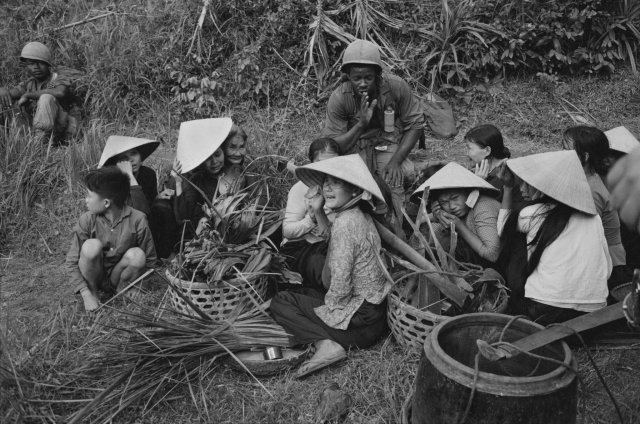 Members of the First Cavalry near Bong Son, in 1967, fearing a Vietcong ambush.