The Game of War: Debord as Strategist

“The only member of the Situationist International to remain at its dissolution in 1972 was Guy Debord (1931–1994). He is often held to be synonymous with the movement, but anti-Debordist accounts rightly stress the role of others, such as Asger Jorn (1914–1973) or Constant Nieuwenhuys (1920–2005) who both left the movement as it headed out of its ‘aesthetic’ phase towards its ostensibly more ‘political’ one. Take, for example, Constant’s extraordinary New Babylon project, which he began while a member of the Situationist International and continued independently after separating from it. Constant imagined an entirely new landscape for the earth, one devoted entirely to play. But New Babylon is a landscape that began from the premise that the transition to this new landscape is a secondary problem. Play is one of the key categories of Situationist thought and practice, but would it really be possible to bring this new landscape for play into being entirely by means of play itself? This is the locus where the work of Constant and Debord might be brought back into some kind of relation to each other, despite their personal and organizational estrangement in 1960. Constant offered the kinds of landscape that the Situationists experiments might conceivably bring about. It was Debord who proposed an architecture for investigating the strategic potential escaping from the existing landscape of overdeveloped or spectacular society. Between the two possibilities lies the situation. Debord is best known as the author of The Society of the Spectacle (1967), but in many ways it is not quite a representative text. Lately there has also been a revival of Debord the filmmaker, but beside being a writer, a filmmaker, an editor, and a first rate professional of no profession, he was also a game designer. According to Debord’s second wife, Alice Becker-Ho, he patented his Game of War in 1965 ten years after conceiving it. In 1977, he partnered with his then publisher Gérard Lebovici to form a company to make board games. The company published the Game of War, and commissioned a craftsman to make four or five sets in copper and silver. …”
Cabinet Magazine
Debord’s Nostalgic Algorithm
W – A Game of War
Le Jeu de la Guerre [Board game] (1977)
[PDF] Class Wargames
amazon: The Game of War: The Life and Death of Guy Debord, A Game of War 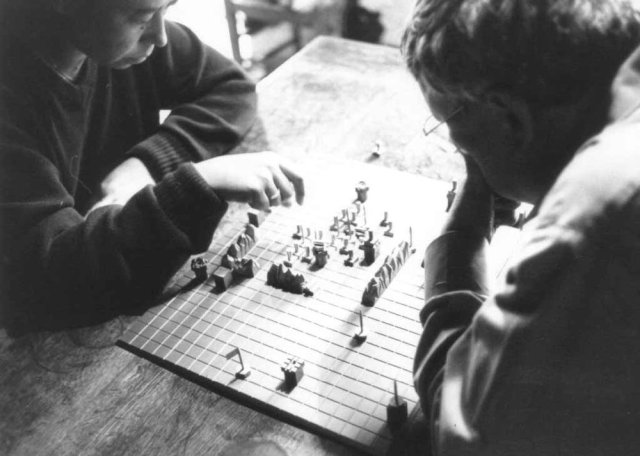