Our Nixon: Whose Life Was It Anyway? 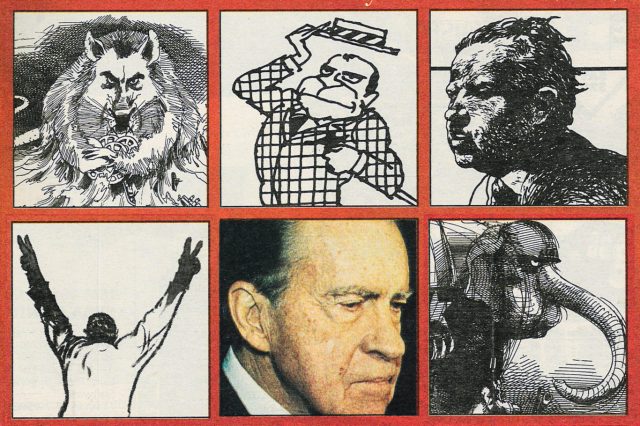 “Tom Carson – May 3, 1994.  1. Nixon is Everywhere. I’m going to put on an old record, if you don’t mind. Let’s see if I remember how this damned hi-fi works. The needle’s kind of scratchy, but — ah, there we go. You’ll rec­ognize those gliding saxophones, noncha­lant and sprightly. The voice, which has a vintage Buick’s lazy swagger — bourbon-ma­hoganied; Camel-catarrhed — belongs to an approximate contemporary of Richard Nix­on’s. I’m playing an alternate take of Frank Sinatra doing ‘Witchcraft,’ of which, as it doesn’t exist, I own the only copy. Saturday, September 20, 1952; Eugene, Oregon. The Republican nominee for vice president chuffed into town aboard his campaign train, the Nixon Special. Two days earlier, the New York Post had re­vealed that the junior California senator had had a secret fund set up for his benefit by his Orange County backers. The follow­ing Tuesday, he would appear on TV, hag­gardly protesting not so much his inno­cence as his virtue, his wife’s virtue, his little daughters’ dog’s virtue — the Checkers speech. But on Saturday, in liberal, colle­giate Eugene, the depot crowd included hecklers with picket signs. According to Roger Morris in his magisterial Richard Milhous Nixon: The Rise of an American Politician, ‘Two junior college students carried one reading ‘WILL THE VEEP’S SAL­ARY BE ENOUGH, DICK?’ ‘ … 2. Yorba Linda. The Roger Morris biography is the best Nixon book, surpassing even Garry Wills’s great Nixon Agonistes, because Morris is the only writer to recognize Nixon’s story as fundamentally Californian; that’s to say, a tale of the West. It’s true that Garry Wills can write rings around nearly everybody, but the problem is that Wills can also write rings around himself. California is where beginnings end. To get there, we devastated a continent, butch­ering its inhabitants as we went. We’d used Africa as a human meat locker. Incredibly, we now spend our time fretting over just where we lost our innocence. But the Nixons missed the epic; missed the, shall we say, glamour. The Nixons came over after the Mayflower, on boats whose names no one remembers. The Nix­ons followed the wagon trains out West, looking for a good spot to put a grocery. The Nixons looked upon the vista that left stout Cortez agape, and thought, Now here’s a place for the grocery; vistas are nice, but we’re too poor to enjoy them. There have always been more Nixons among us than pioneers. …”
Voice