“‘In Cold Blood’ is an eerie case. Not a movie. A case. The film itself, which is fantastically powerful despite its flaws, is the last episode in a chain which began eight years ago when the Herbert Clutter family was murdered near Holcomb, Kansas. Without that murder, Richard Brooks would have been hard-pressed to make this movie, and Truman Capote would have found little employment as the New Yorker’s rural correspondent. When I was typing up the cast credits, I came to the line ‘based on the book by Truman Capote.’ Some grim humor suggested that I could keep on typing: ‘ . . . and the murders by Perry Smith and Dick Hickock.’ In an important sense, this movie was created by Smith and Hickock. They spent most of their lives compiling biographies that prepared them for their crime. Perry came from a violent childhood. His mother drank, his father flew into explosive rages, he was beaten in orphanages. Dick came from marginal poverty, a rootless existence without values. So both were ‘victims of society,’ in the way defense attorneys use that term. For their own victims, they chose the Clutter family–a well-off, middle-class, God-fearing family that, in every respect, lived in an opposite world. If this had been fiction, the themes could not have been more obvious. Two opposed cultures collide. The outsiders kill the insiders in the first round, then lose the second to the hangman. But the film is not based on fiction; the Clutter murders actually happened. If you look at the list of characters you will find names like Herb Clutter and Perry Smith. Real names. Also featured in the cast are Sadie Truitt and Myrtle Clare playing themselves. They were citizens of Holcomb on the night of the murders, and they still are today. Considerations like that make it difficult to review, ‘In Cold Blood’ as a movie. This is not a work of the imagination, but a masterpiece of copying. Richard Brooks and Truman Capote brought technical skill to their tasks in recreating the murders, but imagination was not needed. All the events had already happened. And every detail of the film, from the physical appearance of the actors to the use of actual locations like the Clutter farmhouse, was chosen to make the film a literal copy of those events. …”
Roger Ebert
W – In Cold Blood (film)
Guardian – In Cold Blood: why isn’t the movie of Capote’s bestseller a masterpiece?
amazon
YouTube: Richard Brooks – In cold blood Trailer 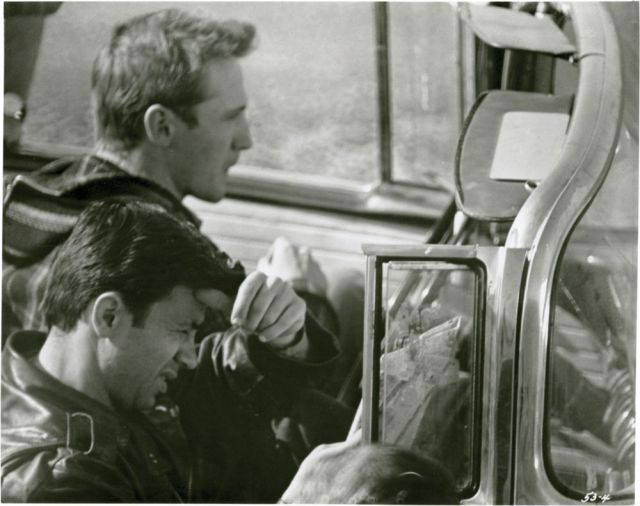