We Shall Overcome: The Power Of Protest Songs

“… The idea of protest singers as finger-picking folkies had been long cemented in popular culture, going back to the 60s, when Bob Dylan brought songs such as ‘The Times They Are A-Changin’’ to the masses, spawning countless copyists voicing virtues through their protest songs. But this was nothing new. People have been using music as a means to express dissatisfaction with their lot for as long as we know. Since medieval times in England, we have records of songs of protest. As sheet music became popular following the advent of the printing press, broadsides (single-page proto-newspapers) often featured ballads, which sang of familiar subjects such as love and loss, but also addressed matters that concerned the people of the day. The British Civil Wars gave rise to songs criticising Oliver Cromwell, for example. These so-called ‘broadside ballads’ gave way to songs promoting socialism, or lecturing about temperance, slavery and other such moral matters. The best of these remain alive today as national anthems or traditional folk songs. The communal singing of songs was also used by slaves in the United States. While dancing was forbidden, the singing of songs was allowed – as long as they weren’t critical of their masters, of course. The slaves used songs such as ‘Swing Low, Sweet Chariot’ and ‘Steal Away’ as hidden messages of escape through the underground railroad. While perhaps not protest songs as we might think of them, this collective singing had a power that would become familiar around the world as songs the likes of ‘We Shall Overcome’ and John Lennon’s ‘Give Peace A Chance’ were chanted by thousands at protest marches. But the emerging recording industry at the dawn of the 20th Century sought primarily to entertain, and, as such, these worthy subjects grew apart from what was gradually becoming known as popular music. Indeed, it wasn’t until horrific events in 30s North America inspired the son of Russian-Jewish immigrants in New York that the protest song as we think of it today was born. …”
udiscover (Video/Audio)
Guardian: Not talkin’ bout a revolution: where are all the protest songs? (Video)
W – 1960s: The Civil Rights Movement, Vietnam War, and Peace and Revolution
NPR: The Inspiring Force Of ‘We Shall Overcome’ (Audio)
W – We Shall Overcome
American Heritage: “We Shall Overcome” 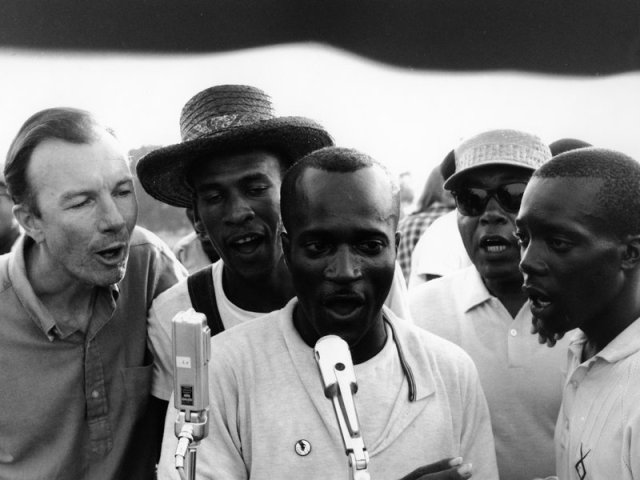 American folk singer and activist Pete Seeger (left) adopted and helped popularize “We Shall Overcome” by teaching the song at rallies and protests. Here he sings with activists in Greenwood, Miss., in 1963.